From the Archive: an ornamented violin believed to be the work of J.B. Vuillaume 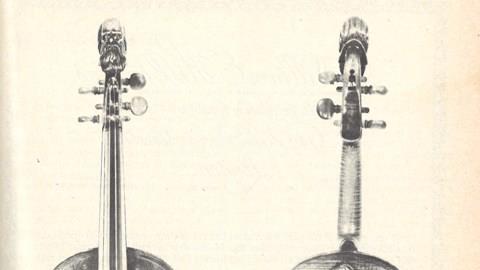 This illustration of a violin by J.B. Vuillaume was published in The Strad, February 1974. The following text is extracted from the article accompanying the photographs

The carved and decorated violin illustrated here bears a label which reads:

...but is believed to be the work of J.B. Vuillaume of Paris who was responsible for a number of instruments of various types reputed to have been made by Gaspar Tieffenbrucker (or Duiffoprugcar, the alternate spelling of his name) a noted German maker of lutes, basses and viols who worked during the first half of the sixteenth century.

Tieffenbrucker was renowned for the inlay work on his instruments, and it is believed that he commenced his working life as an inlayer and marquetry worker in the cabinet making trade. He worked both at Lyons and Bologna.

For many years Tieffenbrucker was credited with having been the first maker of the violin tuned in fifths and this theory was supported by the presence of a small number of violins bearing his name and dated from the early years of the 16th century, but it was subsequently established without any doubt that these were products of the ingenious Vuillaume. Indeed there is no evidence whatsoever that Tieffenbrucker ever made a violin.