Long neglected by the majority of string players, the bows of the 18th century make a huge difference to the way the music from that period is played, argues Jérôme Akoka 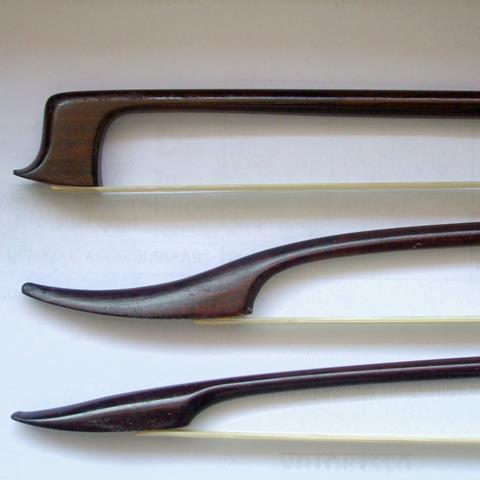 Until fairly recently, the bows of the 18th century were neglected. There were various reasons for this: in the 19th century, for instance, the general drive towards ‘progress’ and modernisation led to a complete disregard for the bows of a bygone era.

They had no commercial value and were regarded as collectors’ items at best: bow makers would keep them as curiosities, and possibly pass them on to colleagues as gifts. Players considered them to be unsuitable for contemporaneous performance, decrying them as too light, too soft or too short.

It was an attitude partly justified by the technical requirements of, for instance, Berlioz’s orchestrations (for which period bows were certainly not suitable) or of bel canto repertoire such as that of Meyerbeer.

Moreover, the profession of bow maker was not recognised until the 20th century (the word for the profession, archetier, did not enter French dictionaries until the 1970s), and in France, 18th-century bows were considered to be examples of pre-Revolutionary aesthetics and, as such, irrelevant. As a result of this attitude, the bows remained largely in museums and private collections.

Much 18th-century repertoire suffered the same fate as the bows of that era. In the 1800s, such works were considered fit to be studied but were rarely performed. Rameau (1683–1764) is an example of a composer whose works were thus neglected, and attempts to play his music with a ‘modern’ bow (one made in the 19th or 20th century) cannot do justice to the articulation required. This is because modern bows have a different balance – they have considerably more weight at the tip than their 18th-century counterparts. In particular, inégalité (unequal weighting of down and up bows) is very difficult to execute with a later bow.

One institution that certainly discouraged the use of 18th-century bows was the Conservatoire de Paris, Europe’s first higher education establishment devoted exclusively to music. It was influential – but it placed its bow collection behind glass, making it inaccessible to players who might be interested in using them.

From the 1970s onwards there has been increased interest in historically informed performance, which has led to a re-evaluation of 18th-century bows. Nowadays, a musician playing an instrument strung with metal strings might consider using different bows for the repertoire of different eras. The idea that a single bow can be used for any repertoire is effectively obsolete. Experimenting with historical bows and gut strings requires players to adjust their technique, and consequently enlarges their arsenal of expressive capabilities.

There was no standard for bows in the 18th century, which meant the proliferation of styles and designs depended on the repertoire their owners favoured. There were the French fluted bows designed to stress down-beats and help with the articulation of small ornaments; or Italian-style bows whose design tends to give the sound more of a singing quality. The early Classical bows are different from the so-called ‘transitional bows’ and Cramerstyle bows – not to mention bows intended for dance music; sonata or concerto playing; church music; musica da camera; opera or continuo playing. The list goes on.

How can this ‘bow revolution’ come about? There are two groups that must take responsibility. First, the museums housing important collections (such as the Musée de la Musique, Paris) need to make them available for study by musicians and bow makers, students and teachers. Secondly, musicians’ input is crucial: the form of an 18th-century bow is radically different from that of a Romantic bow, so players must describe to bow makers as accurately as possible their sensations with an original bow, thus facilitating the construction of copies that recreate more closely the authentic sound that most original bows still deliver.

Video: Making a bow, from start to finish