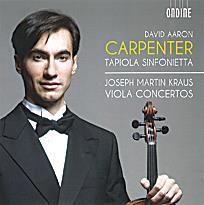 I was more than a little surprised when a CD of viola concertos by Mozart’s exact contemporary Joseph MartinuKraus arrived, since I didn’t even know that he had written any. In the end, though, the music wasn’t that unfamiliar: these are the three concertos that have been known, published and played for the past 250 years as the work of the Benedictine monk Roman Hoffstetter. In the booklet notes, Kraus scholar Bertil van Boer convincingly lays out the evidence for Kraus’s authorship, based on source studies and stylistic analysis. But the important thing is that the music is absolutely charming and shows a deep, hands-on knowledge of the instrument.

As in most concertos from this period, the viola’s uppermost ranges are consistently exploited, with quite intricate passagework, bariolage and passages of double-stops. None of this holds any terrors for David Aaron Carpenter, who plays with unshakeable aplomb and a beautiful sound that retains its quality even in the highest range. The Tapiola Sinfonietta accompanies Carpenter enthusiastically and makes much of Kraus’s interesting writing, which includes some warm-sounding divisi strings and nice woodwind doublings. The important cello obbligato in the G major work – which makes the piece into a de facto double concerto – is brilliantly taken by Riitta Pesola. Ondine’s recording is wonderfully vivid and well balanced.