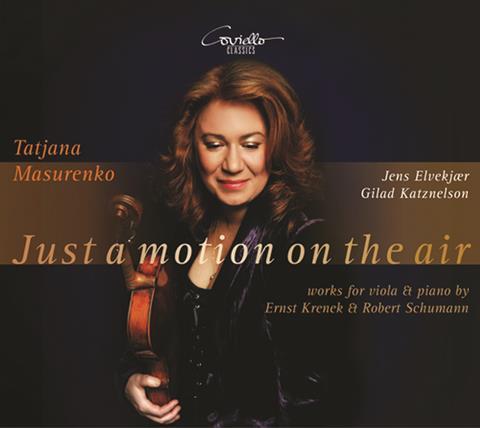 This CD could be titled ‘A Tale of two Tatjanas’, as its protagonist assumes quite distinct musical personalities for each of the composers featured in her recital. In this she is aided and abetted by the use of two pianos with diametrically opposite sound qualities, faithfully recorded in appropriate acoustics. The closely constructed music of Krenek was performed in a sober studio atmosphere that makes for the utmost clarity, the sharp sound of a Steinway suitable for Krenek’s angular melodies. The Vocalise that begins the CD is sensuously phrased by Masurenko and Elvekjær; they also make an eloquent case for Krenek’s compactly inventive viola sonata. In the unaccompanied work, the violist masters the scherzo’s fast triplets and the Chaconne’s multiple-stops with great aplomb. The Schumann selections were recorded in the warmly enveloping acoustics of a Saxon palace that beautifully accommodates the suave sounds of a Blüthner piano from 1876. Masurenko – who here switches to a period bow (Nikolaus Kittel, 1852) – and Katznelson employ a ‘historically informed’ interpretative approach based on their study of recordings made by musicians from the Schumanns’ circle. This results in much arpeggiation of chords in the piano, prominent portamento in the viola and some extremely free agogics that might be disconcerting at first hearing but certainly repay closer acquaintance. Both interpreters shape the intricately interwoven phrases in a completely unanimous manner. The songs that complete the recital have been astutely adapted, and Masurenko ‘sings’ them most lovingly. CARLOS MARÍA SOLARE