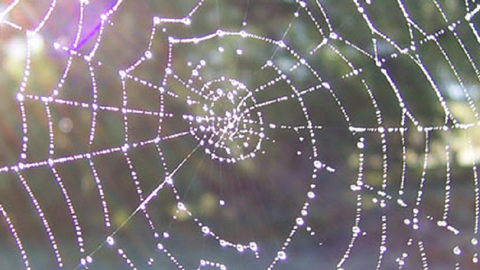 A researcher in Japan has succeeded in using silk from hundreds of spiders to make a set of violin strings. Shigeyoshi Osaki, a professor at Nara Medical University in southern Honshu, used between 3,000 and 5,000 strands of silk for each string, which produced ‘a soft and profound timbre’ when played.

According to BBC News, Osaki bred 300 female Nephila maculata spiders to make the strands, all of which are used by the arachnids to hang from, rather than to make webs. Each string is formed by twisting the silk strands in one uniform direction.

Under an electron microscope, each strand can be seen to have a polygonal cross-section with either four, five or six sides, rather than being uniformly cylindrical. This means that the strands can be closely packed together without any gaps, accounting for its phenomenal strength – greater than either gut or steel strings. Research has previously shown that a spider-silk cord just 3mm in diameter can support a weight of 66kg without breaking.

Osaki first succeeded in making spider-silk violin strings in 2010. His findings will appear in a forthcoming edition of the academic journal Physical Review Letters