When it comes to firing pupils’ imagination and enthusiasm, choosing what to play is as critical as explaining how to play it, says Royal Northern College of Music senior lecturer in music education Philippa Bunting 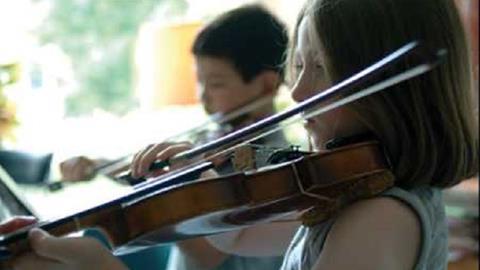 Repertoire: It's our lifeblood. Why learn an instrument if not to play gorgeous music that we love, on our own or in company with friends?

But as we learn, that’s not always what happens. Are our practice sessions always a chance to engage with beautiful music? And are performances an opportunity to share personal, crafted interpretations of the repertoire we love with a friendly audience?

Reading the article about teachers being too nice to their pupils, I realised there may be another area where we potentially let students down: the music we choose for them to play.

Successful repertoire chosen for young children by their teachers needs a sense of satisfying inevitability, in melodic, rhythmic and structural terms. A story or a vivid scene can help to widen the emotional palette, and an accompaniment of some sort creates that sense of performance and connection with a wider musical world.

For older, more advanced learners, the choice of repertoire is more of a negotiation, as the aims of the teacher and the pupil potentially start to diverge. Pieces need to appeal to students’ instinct for making sound, as well as their desire to explore the limits of their technical capabilities and create meaningful, expressive musical structures. Let loose on the warhorses of the canon, they should be free to romp around, even make the most egregious mistakes of taste before being exposed to one orthodoxy or another. Beyond this, they need to be encouraged to explore their own developing personal tastes.

Repertoire for intermediate players is probably the hardest to get right. And since our pupils probably spend the longest time kicking around in that particular playground, it will form a large part of their musical experience. So what’s their soundtrack? Pieces that send the heart soaring? Something technically demanding but emotionally barren? Or some kind of cheerful drivel that, though it might serve useful pedagogical aims, nevertheless becomes the most annoying tune in your head?

It's certainly important to draw in pupils’ own personal musical interests, and there’s no point in labouring over something they just don’t like. But if we cater exclusively to their tastes, we run the risk of forever limiting them to the kind of bland music they might hear in lifts.

Heaven forbid they perceive what they play as irrelevant, but there’s pleasure to be had for them in encountering the unknown, the exotic and the unfamiliar. These are things that we, as educators, have had longer to discover, and can put in a wider context. Though the likes of Harry Potter and Disney tunes might coax hours of practice from the hitherto unwilling student, they can’t define the alpha and omega of all musical experience.

A common response from teachers is simply to devolve the choice of repertoire to others. It’s the next page in the book; it’s on the festival or competition programme; it’s for an exam. Repertoire set, we go about preparing it, polishing like mad, ready for a presentation that’s as close to perfect as we can make it. It’s akin to a sporting activity – one with its own validity, and one that can produce fantastic results. But it can only take us part of the way.

It’s far more difficult to carve out our own path and progress along it with our pupils – to feed them a mixed diet, including music from all eras, and to draw on a wide range of genres. It might even include pupils’ own music, either improvised or composed – but that’s a thought for another day.

Taking this approach means being strict about maintaining an ever-expanding library and devoting a small part of our income to that. Furthermore, it means keeping our own musical interests vital, alive and open, and being brave enough to share them with our pupils.

When music of quality intersects with the pupil’s imagination and aspiration, magic happens. We all have those teaching pieces that make magical things occur from our teacherly perspective: the one that kick-starts a nascent vibrato, the one that suddenly makes a decent legato unavoidable, the one that ignites a dormant sautillé. And yes, let’s use them – they work! But we can also aim higher.

After all, what is the repertoire for in any lesson? Is it a vehicle for increasing technical mastery, or an end in itself? The moment it ceases to be an end in itself, I would argue, a little part of it dies. And along with it, a little bit of the pupil’s musical soul.

Read: How much should instrumental teachers push genuinely talented youngsters?