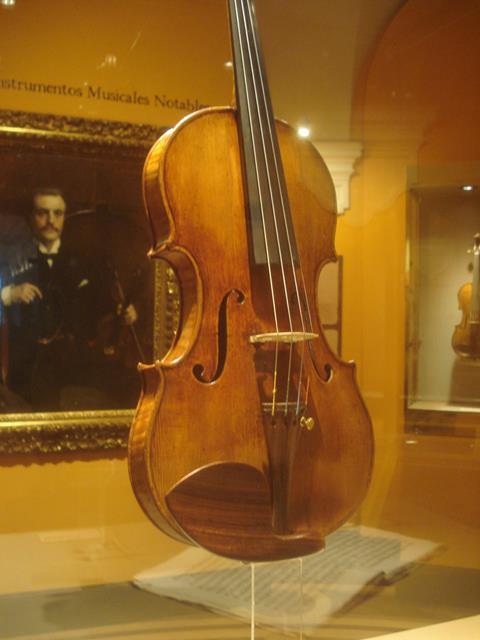 A new permanent exhibition hall dedicated to stringed instruments has opened in Buenos Aires, Argentina. The gallery at the Isaac Fernández Blanco Museum of Spanish–American Art features as its centrepiece a 1732 violin by Guarneri 'del Gesù' (pictured). This instrument is displayed along with a portrait of the museum's founder, Argentinian collector Isaac Fernández Blanco, who was painted holding the violin, which he purchased in 1900.

The permanent exhibition comprises 14 instruments in all, including violins by Rugeri, Guadagnini, Santo Serafin, Gobetti and Cappa, and also several violins made in the first decade of the 20th century by Buenos Aires maker Camillo Mandelli di Calco. The exhibition represents only a small proportion of the museum's collection, which also includes a number of rare bows.

Interest in the collection was stimulated by the rediscovery of the 'del Gesù' in 2007. For 80 years after Isaac Fernández's death, the violin remained untouched among his collection of art and cultural artefacts, until it was unearthed by museum director Jorge Cometti, with Pablo Saraví, concertmaster of the Colon Theater Orchestra. Its authenticity was verified by historian Duane Rosengard and instrument expert Kerry Keane, and it was subsequently restored by New York luthier Horacio Piñeiro.

The instruments in the new gallery will be played in at least six special concerts in the museum's 2014 concert series.