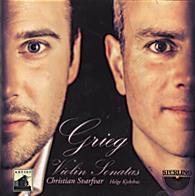 The C minor (no.3) may be the most overtly dramatic of Grieg’s three violin sonatas, yet for sheer enchantment and lyrical freshness the F major (no.1) is among the Norwegian’s most cherishable works. Christian Svarfvar and Helge Kjekshus clearly believe in every note, shaping and timing phrases in the earlier piece with a sense of emotional narrative that leads the listener effortlessly on. Svarfvar’s tonal purity and dynamic subtlety constantly enchant the ear, especially in the unashamedly Schumannesque finale, which he plays with an exquisite sense of the music’s harmonic ebb and flow, deftly disguising the fugal episode that falls away before it has really had a chance to get going.

The two players’ subtle temporal elasticity is at its most engaging in the Second Sonata, providing a supreme example of playing that is more about what is going on between and behind the notes rather than simply the notes themselves. Rarely has the magical subsidiary theme of the C minor Sonata’s opening movement been so lovingly rendered – one can sense the musicians relaxing idyllically, in complete accord with Grieg’s timeless inspiration. Intimately engineered on a scale that matches the chamber-scale sensitivities of the performances, this is an outstanding release.