Get rid of histrionics in quartet playing 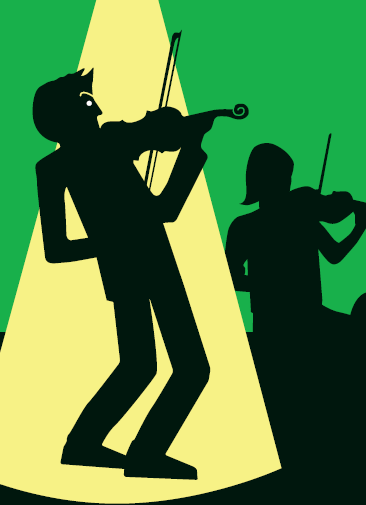 I recently went to six concerts at London’s Southbank Centre where ten different string quartets – some well established, others just starting out – gave performances of Peter Maxwell Davies’s ten Naxos Quartets, one ensemble per work. As well as the pleasure of hearing the pieces performed live, the real revelation was the rare chance of listening to such a large number of different ensembles in quick succession, in a concert rather than a competition setting.

While there were obviously musical differences between the groups – in their phrasing, vibrato, tone colours, ensemble – I became increasingly aware of very different attitudes to the interpretation of the music through facial expressions, body movements and players’ use (or abuse) of their instruments. A few examples really stood out. In one quartet, the first violinist seemed to want to turn his performance into a kind of dance, even going so far as to jump out of his seat on occasions when the music took him. His face was a catalogue of grimaces, frowns and wide-eyed looks of wonder throughout the piece, and he waved his violin all over the place, often seeming to attack it with the bow or with an aggressively fast and biting vibrato.

Yes, we might expect such over-the-top dramatics from first violinists, some might say. But in two other groups it was the cellists who saw themselves as being in the spotlight, and as well as swaying around in all directions they seemed to think that each phrase needed an accompanying facial expression to truly communicate its meaning. Even a simple rising semitone motif for one cellist brought out a pained look of anguish on the first note, giving way to an expression of joyous release on the second.

I found myself wondering what these players were trying to achieve with such theatrical antics. Did they feel they were intensifying the music’s meaning? Or that they were communicating it more clearly and passionately to the audience? Or could they simply not prevent themselves moving around and making faces? Whatever the reason, the truth is that it pulls the focus of the performance squarely on to the individual player, and it’s horribly distracting to watch. Even more startling was that the players’ quartet colleagues gave reasonably restrained, untheatrical performances, making it seem even more as though one member of the group was determined to be a soloist.

It’s tempting to say that all this extra-musical theatricality was separate from the actual sounds the players produced, and to a certain extent that’s probably true. But ensemble can only suffer when one quartet player seems determined to emote in such an exaggerated way. In any case, it’s astonishing how perception of the sounds that we’re hearing can be influenced by the performers’ behaviour on stage.

We might expect – or even appreciate – extravagant histrionics from a concerto soloist. We generally like it when we can see a soloist’s individual personality reflected in the way they approach a work. But then again, a soloist really is in the spotlight, the focus of the piece, and they are often battling against the full force of an orchestra for attention.

But in a quartet? There, the players’ individual personalities should surely be subsumed into a group identity. As an audience, we should be far more interested in watching communication within the group as material is passed around, the odd exchanged look to acknowledge a significant moment. This over-emphasis on individualism and hogging the spotlight has no place in chamber music playing. And from the audience seats, it can wreck a performance.

This article was first published in The Strad, December 2009. For more comment and debate, subscribe to The Strad or download our digital edition as part of a 30-day free trial. To purchase back issues click here.