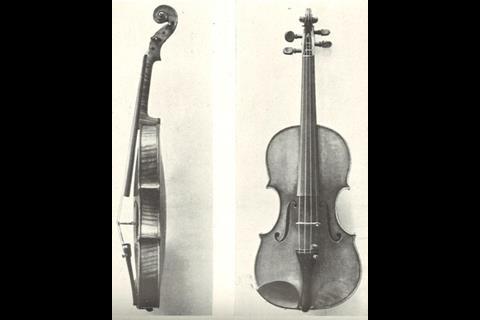 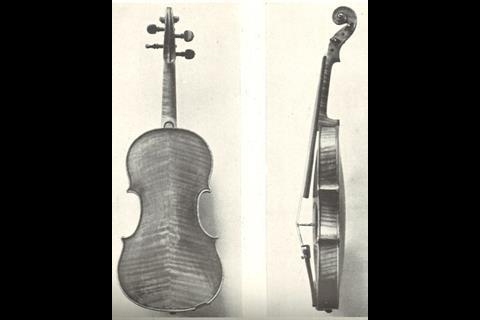 This illustration of the Giuseppe Guarneri ‘del Gesù’ ‘Leduc’ violin was published in The Strad, March 1924. The following text is extracted from the article accompanying the photographs:

Unlike several well-known Strad violins, the ‘Leduc’ seems to have no particular history, either romantic or otherwise attached to it. Be that as it may, it is in a first rate state of preservation, and has long been recognised among connoisseurs as one of the outstanding examples of the master’s later method.

A point of great interest about it is the date – 1745 – which is supposed traditionally to have been the year in which the great Joseph died.

A bold, vigorous looking fiddle, with a fine sweep in its curves, it unquestionably is, but there is no trace of any of the grace of outline seen in most of the violins of Stradivarius or of Amati. The casual observer would as likely as not pass it by either unnoticed, or with a shrug; especially if he happened to glance at the weird scroll.

The varnish is still plentiful; it is red, with a remarkable ‘bloom’ upon it, which judges have often commented upon.

The wood of the back and sides is handsome, and the pine in the belly is a very fine piece of timber with a well defined reed.