From the Archive: a violincello by William Forster II, London, c.1785 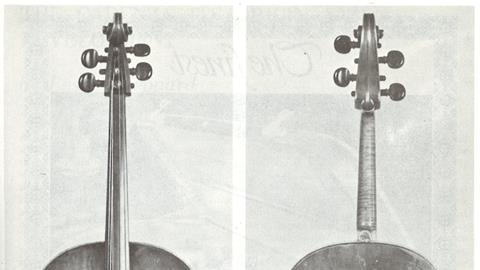 This illustration of a cello by William Forster was published in The Strad, April 1979. The following text is extracted from the article accompanying the photographs:

William Forster II, generally referred to as 'Old Forster' and sometimes as 'Royal Forster', was born at Brampton, Cumberland in 1739, and died in London in 1808. He is the son of William Forster I, who instructed him in the craft of spinning wheel making, and later initiated him into the art of violin making. At the same time his father also encouraged him to learn to play the violin, which later accomplishment earned him a high local reputation as an energetic player of Scottish reels.

On finding regular employment at a musical establishment named Beck, in Tower Hill, he concentrated on making some of his best violins, all on the Stainer model. The instruments so made earned him considerable acclaim from the musical fraternity, and greatly enhanced his reputation. He was then imbued with more confidence and started out on his own account in a modest way in Duke's Court in 1762. After a time, encouraged by increased patronage, he moved to more imposing premises in St Martin's Lane, and eventually to The Strand in 1784. By that time, he had long since abandoned the Stainer model in favour of the Amati. He particularly excelled in making cellos, which were considered to be greatly superior to his violins and violas. They possessed a full and penetrating tone of rich quality.

The cello illustrated dates from c.1785 and is of the Amati model. It measures 1/16 below 29 inches in length of body; this slightly shorter length in relation to current standards was favoured at that time by English makers. The back is of maple with small figure, cut on the slab, and is in two pieces, with a wing on the bottom right side that is original; the sides and head are of similar wood. the table is of close grained pine, opening slightly towards the flanks, and the varnish is a rich red-brown colour. It is inscribed on the bottom ribs with the wording 'Sold at Wm. Forster's Music Shop, 348 The Strad'.

This handsome and well-preserved cello is a truly representative example of the best period of this great English maker's work.