From the archive: a violin by Pietro Guarneri of Venice, 1737 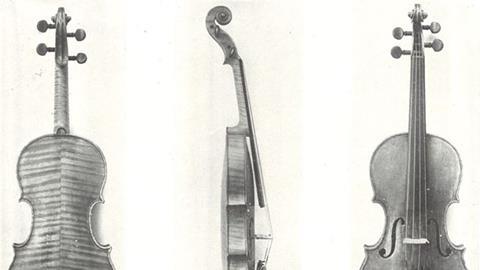 This instrument by Petrus Guarnerius, Venice, 1737, is published in The Strad, January 1928. The following extract is taken from text accompanying the photographs:

Known by the name of Petrus of Venice, to distinguish him from his uncle of the same name who worked for many years in Mantua, our subject is a personage of great interest, both on his own account and as a pivotal figure in several theories and problems.

Cremonese born was he, and his fidelity to the city of his birth and its teachings was lasting, and as late as 1750 he still tells us of his origin, in the inscriptions on his labels. His known parentage, together with his removal to Venice, give rise to the very interesting question – who really was Joseph Guarnerius del Jesu?

The connoisseur of a past generation was asked to believe that Joseph belonged to a cadet branch of the family, and that his father was not an instrument maker. I suggest that the known facts concerning the later members of the Guarnerius family, considered together, point to the great Joseph having been the son of the elder Joseph, and therefore the brother of Petrus of Venice.

The very excellent liutaro who is the subject of this essay is linked in my mind with Carlo Bergonzi, in demonstrating the independence and vigour of mind which the better of the old Italian masters possessed. It is show in this way. Petrus sprang from a family whose work shows many fine and original features, yet he was not a copyist of any of his relations but was an original worker to th end. Yet again, though he laboured many years in Venice, amongst workmen of great ability, he was not swayed by an of them, but remained his Cremonese self to the last.

The tone of the violin here is remarkably fine, and seems to me to have a real Guarnerian timbre. ... The readers' attention is directed to the maple-wood of the back of this Petrus Guarnerius violin, as it is a good example of 'fine foreign wood'. This wood, which is of a broad soft figure, and highly charged with 'nutmeg-spots', is not native to Italy but comes from easterly European countries.

The varnish of Petrus is of Cremonese character and excellence, and is therefore more delicate in colour and wearing qualities than the Venetian composition, which is slightly harder, less perfectly transparent, and is of higher colour.

So far as I know, Petrus Guarnerius was the last of the truly classical school of Cremona to remain alive, and as he was certainly still working in the year 1750, we are entitled to surmise how very few generations could conceivably have separated us from him.