From the Archive: a violin by Carlo Guiseppe Testore, Milan, 1700 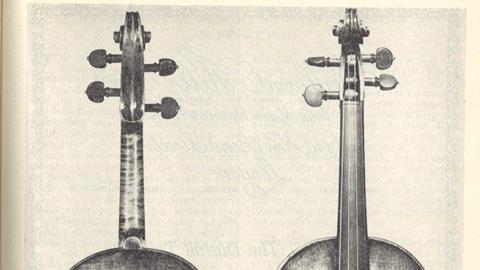 This illustration of a violin by Carlo Giuseppe Testore was published in The Strad, February 1970. The following text is extracted from the article accompanying the photographs:

The violin illustrated here is a fine example of Carlo Giuseppe Testore's best work. He was the founder of this family of Milanese makers and is generally considered the best craftsman. Many instruments made by Carlo Giuseppe and his sons, Carlo Antonio and Paolo Antonio bear a brand mark in the form of an Eagle. The Testore worked at the Sign of the Eagle in the same narrow street in Milan where the Grancinos lived and worked at the Sign of the Crown.

To return to the violin illustrated. This bears the following label:

The back, in two pieces, is of rather plain maple marked by a faint curl, the wood of the sides being similar and that of the head plainer. The back is unpurfled, two lightly incised lines taking the place of the usual inlay. The varnish is a dark red-brown colour.

The authenticity of this Testore is certified by William E. Hill & Sons. It is now being offered for sale by its present owner, the well-known American collector, Mr. Ted Marchetti, of 4175, Nottinghill Gate Road, Columbus, Ohio, U.S.A.