From the Archive: a viola by Daniel Parker, London, 1715 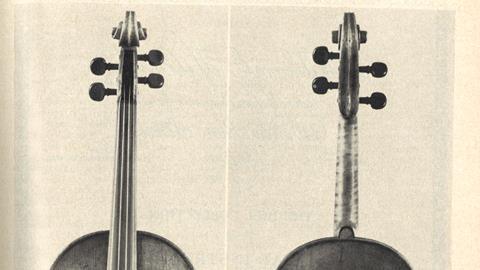 This illustration of a Daniel Parker viola was published in The Strad, June 1969. The following text is extracted from the article accompanying the photographs:

This month we are illustrating a large viola by Daniel Parker bearing a label dated 1715. It measures 17 inches in length of body; other dimensions being Top Bouts, 7 15/16th inches, Lower Bouts, 9 5/8th inches and Ribs 1 7/6th at the neck increasing to 1 ½ inches at the tail-pin. The one-piece back is without figure, a rather unusual feature for this maker who more often than not used handsome wood for his backs. The table is of vigorous pine with close to medium open grain. Parker used both an oil and a spirit based varnish; the viola illustrated being generously covered with a rich red-brown oil varnish.

Daniel Parker is now generally acknowledged as the finest of the English makers working in the 18th century. The exact period of his activity has ever been satisfactorily established but it is fairly certain that he was working in London in the early 1700’s and was making until about 1730. Unfortunately very few of his instruments have his label.