From the archive: a cello by Daniel Parker 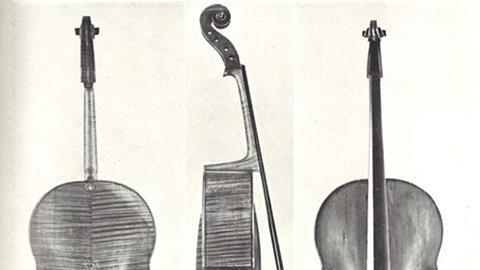 This cello made by the 18th century English maker Daniel Parker appeared in the September 1930 issue of The Strad, accompanied by the following text (extract):

No lions menaced our Daniel, his danger coming from humbler, duller creatures. Rarity of examples and the inflexibility of orthodoxy were the factors which for many years operated to keep Daniel Parker from his place amongst the great masters of the English school. Duke, Banks, Betts and others had the early and strong support of contemporary players, and the large instrument output of each of those makers enabled their names to remain before the musical public during subsequent generations.

Parker's existing instruments are comparatively few in number, his labels being still rarer. Yet his ability and refinement were so exceptional and the violoncello portrayed in the plate is an instrument which I consider to be a great masterpiece.

Parker may be considered as the last representative of the first school of English makers. Amongst his possessions of the early school were materials and varnish of a character much nearer to the Italian than those later makers. It might be said that the Stradivarian inspiration of Daniel Parker's violin type is imperfectly discernible in the violoncello here, but although the modern maker is largely only interested in one variety of the violin forms of Antonio – the mature pattern – there were earlier and very artistic kinds which have their own appeal. The elliptical waist-curves should be noted. It is probably from the gems of Cremona that Parker derived his inverted setting of the figure of some of his jointed backs, whilst his varnish shows, in tint and texture, his endeavour to hold a mirror up to the instruments of Italy.