From the archive: a 1712 viola by Giovanni Grancino

Published in the January 1989 issue of The Strad and also featuring on its cover, these photos accompanied an article by Roger Hargrave, an extract of which appears below 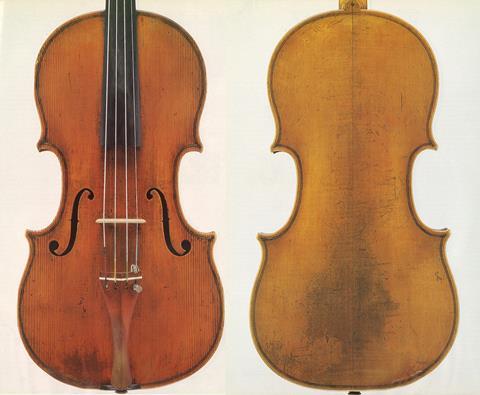 Arguably the greatest gift of the Milan school lay in their prolific output. Possibly because of their emphasis on their presumably more affordable price range, Milanese instruments tended to reach working musicians. As a consequence they probably led a more perilous existence than the relatively secure one proffered by Cremona’s wealthy clientèle (a situation which has not changed very much today). The result has been that few Milanese instruments have survived unscathed. Since Grancino violas are in any case less common it is something of a rarity to find one in such remarkable condition.

The body itself is deliberately elongated especially in the upper bouts. This feature taken together with the lower setting of the sound holes has created a somewhat difficult stop length by today’s standards. In this respect it is a viola which might not suit some players, in spite of its outstanding tonal qualities. On the back the long and narrow top and bottom bouts are accentuated by a typical flattening of the outline curves as they run into the corners. The corners themselves are clean and elegant and like the edgework they have a fairly shallow flute. Along the underside of the edge, a knife-cut chamfer neatly finishes the rounding of the edge. The back arching is strong, flat and full across the centre bouts and seems almost certainly influenced by Cremonese work. On the back there is no inlaid purfling. Instead lines have been scratched and burned or perhaps stained directly into the back in imitation of inlaid work. This was a common practice among Milanese makers; they do not seem to have painted on purfling in the manner of the English makers. There are clearly no locating pins in the back which might otherwise have been hiding under an inlaid purfling. The wood used for the back is of fine growth with a faint narrow figure. It is cut on the quarter. Such lightly figured wood was a frequent choice of the Milanese masters. Beautiful figured maple was for one reason or another generally beyond their reach. The ribs are of similar wood to the back. As usual, the top rib was originally made up of one continuous piece across the neck root. In contrast the head wood is of very wide growth and has no figure.

Again in common with most Milanese instruments the belly wood is of good quality with straight, well pronounced reed lines. Unlike the back the belly is purfled in the normal way. It is boldly executed with well stained blacks. As is usual on classical works the individual strips of purfling vary in width throughout.

The edgework is similar to that of the back, having shallow fluting with the highest point well out towards the edge. In the centre bouts the flute runs into the side of the soundholes but not into the wings. Again the arching is full and strong across the centre. The arching is possibly the outstanding feature of this viola, beautifully formed overall and no doubt contributing also to its wonderful acoustical qualities.

The central bouts are wide when compared to the width of the upper and lower bouts. Consequently, although the top circles of the sound holes have a wide setting, the sound holes have not had to be squeezed up against the edgework like a Bergonzi or a late Stradivari. The soundholes sit quite naturally on the arching leaning slightly inwards at the top. The four circles appear to have been drilled but the process of joining them to the main bodies of the holes has distorted them slightly. The bodies of the holes are cut almost vertically to the plates’ surface. The nicks are large, slashy and typically Milanese.

The varnish … is of a golden yellow colour and highly transparent. These yellow Milanese varnishes have been compared with the early Cremonese varnishes in particular those of the Amati family. However they are somewhat thinner and harder in quality and quite different. On the belly the varnish seems slightly darker and warmer in tone and the reed lines have a typical Milanese prominence due in part to their tendency to collect and hold dirt. On this viola the varnish is present in large amounts.