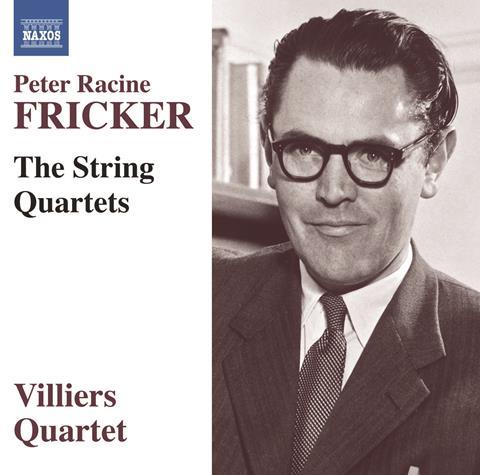 Any Bartók or Shostakovich aficionado should enjoy getting to grips with the quartets of Peter Racine Fricker (1920–90), which here receive magnificently assured, mostly premiere recordings. The Second was commissioned by the Amadeus Quartet and recorded in 1953, four years after the ensemble and its audiences had been impressed by Fricker’s extended single-movement First Quartet.

The influence of Bartók – through Fricker’s teacher Mátyás Seiber – is most palpably but productively digested in the Second Quartet, from its cogently discursive first movement through a scherzo spiked with nocturnal pizzicatos to a concluding Adagio that deserves the inquieto marking given to other movements in the cycle. The Third dates from 1976, once Fricker had settled happily in California. Despite his declared revival of interest in the genre thanks to Elliott Carter’s Third Quartet, †¨the work doesn’t notably develop or advance from the Second until a variation finale, which invests Webernian serial procedures with infectiously vernacular vigour.

This is demanding music, and the Villiers Quartet has done well for reviving it with such immersive mastery that the occasionally grey, cardboard quality of the melodic material is coloured and corrugated into quirky, restlessly compelling structures. The London church acoustic lends bloom and a sense of space to Fricker’s never-quite-atonal harmonies without occluding them.