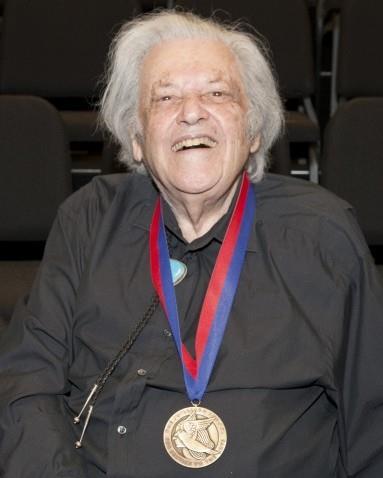 Robert Mann, founding violinist of the Juilliard String Quartet, has been awarded the President’s Medal by Juilliard president Joseph Polisi. The quartet’s long-time teaching studio at the school has also been dedicated to Mann with a special plaque at a ceremony attended by seven decades of Juilliard Quartet members.

Robert Mann, now aged 93, founded the Juilliard String Quartet in 1946 at the invitation of the school’s then president William Schuman. He served as first violinist for 51 years until his retirement in 1997. Mann is currently a faculty member of the Manhattan School of Music, and for the past two years has presented the Robert Mann String Quartet Seminar.

The President’s Medal is presented to individuals ‘who have made an indelible impact on the arts profession, and have served as important role models for the profession and for Juilliard’.

The current Juilliard String quartet members are Joseph Lin, Ronald Copes, Roger Tapping and Joel Krosnick. Since its foundation the quartet has played approximately 5,500 concerts and performed more than 500 works including 100 premieres. Its discography includes recordings of more than 100 works.