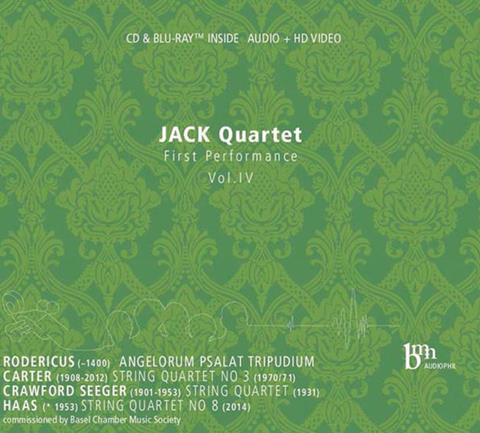 Fearlessly tackling the most cutting-edge contemporary music, the Jack Quartet is an exceptional group, so it’s no surprise that this disc – recorded live in Basel – features some stunning performances.

Ruth Crawford-Seeger’s 1931 Quartet is often hailed as the first modernist example of the form. The Jacks play it as a party piece, bringing pinpoint detail to the teeming first movement, rich layering of sustained sounds in the second and a fascinating fixed-yet-changing relationship of three players contrasted against one in the finale.

Austrian Georg Friedrich Haas’s Eighth String Quartet is at first a hard listen, with an opening fugato subject outlined in microtones. But the Jacks create a purity within this dissonance and explore a section based on overtone chords with otherworldly wonder. This work receives a spoken introduction (in German) on an accompanying Blu-ray disc. The clean recording highlights the eye-watering difficulty of these pieces and clearly exposes the group’s abilities.