The Orchestre d’Auvergne has gone digital. Earlier this year, it became the first orchestra in France to launch its own label, Orchestre d’Auvergne Live – a label numérique, the releases available on Spotify and other streaming platforms. Its latest offering is a Haydn violin concerto, the C major, and string orchestra arrangements of the Strauss Wind Serenade and the Bruckner String Quintet, with Thomas Zehetmair as soloist and conductor.

The core of the orchestra is a full-time string section of 21 players – to which a wind section is often added – a scale that allows for both symphonic weight and chamber-like intimacy. Guillaume Chilemme, the orchestra’s leader, says, ‘We practise like a chamber group. It is like playing in a string quartet; you can go very deeply into a piece.’

Zehetmair agrees: ‘The atmosphere is very productive. It is an atmosphere of listening, of always being curious. The players often find the solutions among themselves, which is great for a conductor.’

The orchestra is based in the centre of France, in Clermont-Ferrand, a city surrounded by a string of extinct volcanoes called the Chaîne des Puys, whose picturesque summits grace the cover images of the new releases. Clermont-Ferrand is an industrial city, the home of the tyre manufacturer Michelin, which has long been the heart of its economy. 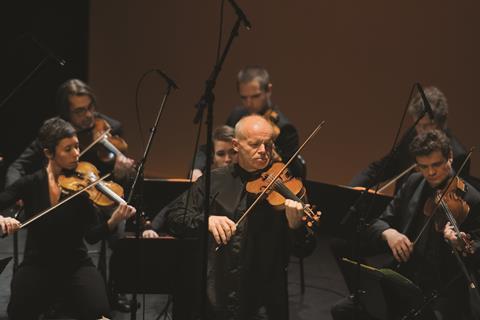 But the city is changing. Government incentives have led to the founding of many digital start-up companies, and the city is becoming increasingly prominent as a cultural centre, not least for the Clermont-Ferrand International Short Film Festival, the largest of its kind in the world. A fitting venue, then, for an innovative new venture in digital music.

The orchestra’s musical director, Roberto Forés Veses, explains: ‘The new label arose from our strong desire to show that musical standards are high in France, and not just in Paris. Our challenge is to let people further afield hear that we are comparable with the finest chamber orchestras around the world.’

For the first release, the orchestra chose a much-loved classic – Beethoven’s Seventh Symphony, conducted by Forés Veses. ‘We have played several Beethoven symphonies now,’ says Chilemme, ‘but it is always small-scale Beethoven.’ In fact, the string complement of the Orchestre d’Auvergne is close to what Beethoven would have expected, allowing the orchestra to explore the textures and instrumental combinations on the scale the composer intended: precision, clarity of tone and focus of expression are the rewards.

Haydn’s Violin Concerto in C major opens the new release. ‘This is very enjoyable music, very uplifting,’ says Zehetmair. ‘The second movement is divine, a beautiful aria melody. It is early Haydn, but his character is already clear – it has his full signature.’ The orchestra plays with a minimum of vibrato here. ‘It means that we can use vibrato as a means of colour,’ says Zehetmair. ‘That gives the possibility of different vibratos as different means of expression.’

Transcriptions for string ensemble are the heart of the orchestra’s repertoire. Their new recording of Erwin Stein’s arrangement of the Strauss Wind Serenade is the first ever, and it certainly deserves a place in the catalogue. The original was written for 13 winds in 1881 when Strauss was just 17, and it was his first success as a composer.

Stein’s version retains the sophisticated chord voicings by dividing each of the string sections to give the ten independent lines of the original. Zehetmair says, ‘We focused on making it sound like a string piece, rather than imitating a wind sound. It works beautifully for this size of orchestra, which has many voices, allowing elegant harmonies and really huge climaxes.’

Bruckner’s String Quintet is presented in a version by Zehetmair, but the conductor plays down his role as arranger. ‘You don’t need to arrange this music. You just need to decide two things: when to use solos, rather than tutti, and when to use the double basses. Of course, the more the basses play the better: they give a ground to the orchestra. But when the cellos play very high, adding the basses can sound odd.’

Including solos is a natural choice, given the excellent solo playing of the orchestra’s first desks. But Zehetmair uses the solo sound sparingly, treating the lighter texture as a contrasting colour, most memorably in the delicate counterpoint of the first movement’s development section.

Another potential issue is the division of the viola section. Bruckner’s original calls for two violas, and those two parts are represented here by just four players. ‘It could have been a problem,’ says Zehetmair, ‘because we have many first and second violins, but just four violas.’ The solution came from the players themselves. ‘I thought I would have to encourage the viola players during rehearsal, but they soon realised their responsibilities, and it turned out not to be a problem.’ 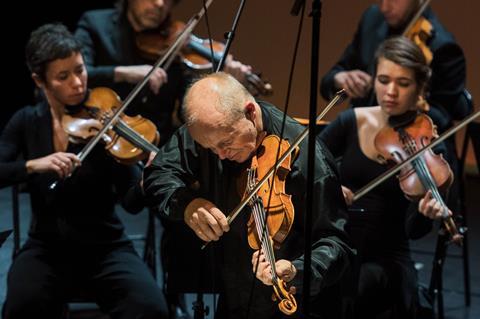 Zehetmair points out that the string orchestra version of Schoenberg’s Verklärte Nacht is a similar case, because the two viola parts of the sextet original are represented by just a small viola section. But in both the Schoenberg and the Bruckner, Zehetmair finds the larger ensemble preferable. ‘The orchestral versions add something. They give the music extra space, extra colours and possibilities.’ Verklärte Nacht is scheduled for a future release on the label.

The Orchestre d’Auvergne maintains a high profile in Clermont-Ferrand and across central France, as well as touring internationally, more than any other French orchestra. The Orchestre d’Auvergne Live label is following its performing activities, bringing the diverse concert performances to a wider audience. Another release is already available: Paul Juon’s string orchestra arrangement of Sibelius’s String Quartet in D minor (Voces intimae) recorded at Saint-Louis des Invalides, Paris, in October last year.

The next release, scheduled for September, is of Bach concertos with pianist Robert Levin plus the Goldberg Variations in the Dmitry Sitkovetsky arrangement for strings. After that there will be recordings of Second Viennese School composers, including Berg’s Lyric Suite, and a return to Strauss with his Metamorphosen. A new release every two months is planned, so if you can’t get to Clermont-Ferrand, the next best option is to click ‘follow’ on the Orchestre d’Auvergne’s Spotify page.