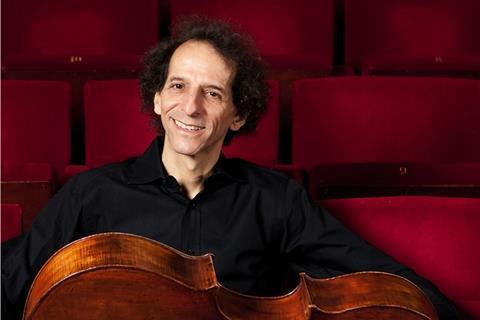 When did you first experience discomfort when playing the cello?

The problem started in my teenage years: I felt pain spreading from my right thumb, up my arm, and into the shoulder and upper back. Eventually, the whole of my right side was chronically affected. My reaction: denial! I was unwilling to face the possibility of a flawed cello technique and was convinced that my condition was the result of subtle changes in the length of my bow hair caused by humidity variation.

I had the hair length adjusted accordingly but, needless to say, it didn’t help. Cello pain was something that I never discussed, not even with my closest friends. I certainly had no faith in doctors. They would tell me to take time off and relax, advice I was sure to ignore. I was too stupid and headstrong to do anything that might be good for me.

In those days I was a little bit intense and I would solve all cello problems by playing more and practising harder. Six or seven hours of daily practice, especially at the level of violence with which I attacked the cello, might not have been the best thing for my body.

I believed the more intensity, the better the music. I think I was thoroughly confused between intensity, tension in music and tension in the body. I realised that I needed to change my ways when a friend said after a concert that she admired the way I got through the performance by ‘sheer willpower’. I wondered if this was the musical quality for which I wanted to be remembered. But there was little change in the next 20 years.

How did you finally overcome the problem?

In June 1995 I broke my right thumb in a cycling accident and had to be in a cast for six weeks. I was desperate to be ready for a performance of the Walton Concerto at a Proms concert at the end of July. With my hand in plaster I couldn’t hold my bow, so we went on holiday (unheard of) but every day I’d hammer out the left hand of the Walton with a few pathetic pizzicatos from the right fingers poking out of the cast.

When the cast came off, my thumb was weak and the only way I could play was by holding the bow softly and without squeezing. So there I was, playing without tension in my thumb because that was the only possible way to play. It strengthened enough to play the Walton; it was maybe not as emphatic a performance as I would have given before the injury. And of course, since releasing that tight grip on the bow, I have never again experienced pain in the arm and back.

Until my thumb was weakened I had not fully grasped the concept of a softer bow hold, combined with motion and weight in the right arm as opposed to pressure, and it still astonishes me that of all the bones I should have chosen to break, it was my right thumb, the one that was giving me all the trouble.

Has this had a long-term effect on your playing?

It was a major turning point. I had been trying too hard in every way, not only thumb-squeezing. Since the thumb fracture, I have played with much more lightness: everything in the body feels freer and I am able to breathe more naturally. The more one is able to relax and breathe playing an instrument, the more natural and beautiful the sound will be. I don’t claim to be pain-free, but nor do I want to be.

Consider the suffering endured by Beethoven, Mozart and Schubert, and it seems only right that we performers are not too comfortable when we attempt to transmit their music accurately.

Have you enjoyed good health since the thumb fracture?

Largely yes, thanks to some preventative exercises to keep my lower back healthy. I used to have horrible lower back spasms, but now I do stretches and sit-ups every day to keep the back and stomach strong and flexible, which has made a big difference. And now I am an obsessive runner. I’ve enjoyed running for more than 30 years, but over the last two years or so it has become an addiction. I manage five or six miles a day now. The only downside is a horrible feeling of airlessness if I go more than a day without running. So the running shoes travel everywhere with me and the only pains I suffer are in the feet, knees and shins.

What advice would you give to someone suffering from the same tension problems that you had?

Get rid of it as much as possible, as a high priority. Tension is severely debilitating and as incapacitating to the listener as it is to the player. Having said that, to eliminate tension and pain completely is unrealistic, and if you are to continue playing, the goal is to reduce them to a bearable level.

This article was first published in The Strad, July 2009.