Face to face with Stradivari's finest 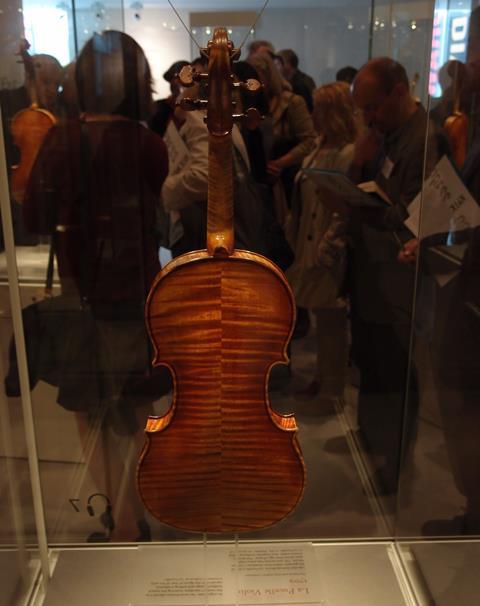 Blockbuster exhibitions are a staple of the museum world these days. Ever larger collections of essential masterpieces, set out so as to reveal new insights into an artist’s career, are assembled in the world’s capitals, generating long queues of devoted admirers. Such events do not happen in the staid and quiet little backwater that is the world of fine violins. However, something of the sort has now happened at Oxford’s famed Ashmolean Museum, gathering the great and good of the fiddle trade, such as they are, to its august halls.

The Ashmolean’s exhibition Stradivarius, curated by the museum's Jon Whiteley, with the assistance and guidance of Charles Beare, opened last Thursday to great acclaim. The exhibit walks the visitor through the range of Stradivari’s inventiveness and intelligence by using the very best learning tools of all: 21 of the best-preserved and iconic examples of his craft. It is the first major exhibition of Stradivari’s work since the Cremona exhibition of 1987, and while smaller in scope it is nonetheless thoroughly complete from the standpoint of learning by observing the master's work.

The importance of this cannot be overstated, for any comparison between the instruments shown here and the run-of-the-mill examples that have been in active use for the past few centuries would be striking, even shocking. The common refrain that the greatest Stradivaris should be played, not placed in museums, misses the point that these instruments are a treat for the eye as well as for the ear and furthermore are the foundation upon which the future of violin making must build. The average musician is not aware of how fragile a violin actually is, nor of the toll that cleanings, polishings, and light friction take on both fine details and finishing varnishes. It is humbling to consider that, only decades ago, there were far more Stradivaris in this condition than today, or that the violins in the exhibition would have been seen as almost ordinary 150 years ago, when Vuillaume was trying to replicate their appearance in new works. This makes it all the more important that aficionados see this exhibition while the opportunity lasts.

Those of us in the fiddle world take for granted an understanding of violins to which the rest of the world is not privy. The exhibition very nicely fills in this gap. As you enter the galleries, to the left there is a display outlining the steps of making a violin in the Cremonese manner. To the right, there is a small workshop, set up to show how that method is executed. There is also the Ashmolean’s 'Alard' Nicolò Amati of 1649, to give context to the revolution that Stradivari wrought, and a choice selection of original forms, patterns and tools, courtesy of the Stradivari Museum in Cremona. Of particular interest to me were the templates for the decorations on violins such as the 'Cipriani Potter', on view in the next room; the pattern for a mandolin, one of which is also seen there; the forms on which many of the violins on display were created; and the template for the placement of an f-hole.

As you enter the main gallery, the first sight is the first violin, quite literally: the 'Serdet' of 1666, the earliest known Stradivari with an original label and the only one with a label in which the master claims to have learned the craft from Nicolò Amati. Perhaps strong words from Nicolò himself caused the dearth of other examples of its use. Certainly it is a lovely violin, showing great homage to the master, although not necessarily indications of what was to come. That is revealed by the arc of instruments that keep company with the 'Serdet': the 'Cipriani Potter' of 1683, the 1688 guitar, the 'Benecke' violin of 1694, the 1696 'Archinto' viola, and the 1698 'Baron Knoop' violin. This arc very quickly takes the viewer through a sea change of style and concept, from the early Amatise style, through the long pattern to the period of Stradivari’s reimagining of the violin at the end of that century.

The next group of violins takes the viewer into Stradivari’s maturity. The 'Parke' of 1711, 'La Pucelle' of 1709 (pictured above), and the 'Viotti' of 1709 have much in common, but are also notable for their extraordinary states of preservation. Covered with a thick coating of original varnish, minimally polished, and with edging and corners still fairly sharp, they eloquently demonstrate both Stradivari’s meticulous attention to detail and the spontaneous nature of his control over the tools of his trade. Of these three, 'La Pucelle' is perhaps the most glamorous, and since it has so rarely been viewed by the public, it warrants long study.

Next comes a trio of cellos, an instrument that was as deeply redesigned by Stradivari’s imagination as was the violin. The 'Cristiani' of 1700 leads the way, followed by the 'Bass of Spain' of 1713 and finally the 'Batta' of 1714. At the time he made the 'Cristiani', Stradivari was already reconsidering the question of size, which led to the development of his B form, on which the 'Bass of Spain' and the 'Batta' were built. Smaller and easier to manage than the old cellos, this form became the standard by which future cellos were judged and the model on which an overwhelming number of cellos have since been built. All three assembled cellos are in exquisite condition, although all three also have the worn upper treble corners on the back – evidence of active use by cellists, and a sign, no doubt, of their desirability as musical instruments.

The mandolin, along with the guitar and the next instrument in the display, the 'Fountaine' violino piccolo of 1712, open a broader vista on Stradivari’s activities, from a time when the term liutaio was taken very literally. These workshops made violins, but they also made viols, guitars, lutes, mandolins, pochettes, harps and a host of other instruments that were once in demand. The violin family was the most successful, for composers as well as players, and also the most resilient; very few of these other creations have survived, and their presence here is thus all the more appreciated. The 'Fountaine' also offers an added treat: as a small violin, it was little used, even less polished, and its scroll almost not at all. Thus the visitor is treated to the original appearance of much of the vaunted classical varnish: outwardly opaque and textured, it reveals depth and colour in varying degrees depending on the light source. One sees this on many of the other instruments here, but not to the degree of the 'Fountaine'.

More great violins follow. As you walk further into the gallery, you meet the magnificent 'Boissier' of 1713, still very much in the state in which Sarasate acquired it in the 1880s; the equally magnificent 'Alard' of 1715, hardly ever seen in exhibition, and then a trio of wonders: the 'Messiah' of 1716, the 'Tyrell' of 1717, and the 'Lady Blunt' of 1721. These last three share a similar freshness but also concept, craft and detail, which is deeply instructive.

In Stradivari’s last years, he kept working even as his skills declined. The 'Kreisler' of 1733 and 'Habeneck' of 1734 show his determination as well as the role his son Francesco played as his primary assistant.

If there are shortcomings to the exhibition, they are minor. I regret that more violas were not present, for if Stradivari’s ideas on violas were less successful than his ideas on violins and cellos, his violas were still beauties. For that reason, it is sad that two treasures from Florence are not a part of the exhibition: the 'Medici' violin of 1716 and the 'Tuscan' viola of 1690, probably the single most perfectly preserved Stradivari instrument in the world. My understanding is that their absence had to do with governmental bureaucracy rather than the will of