Dorothy DeLay was born on this day in 1917. In this excerpt from September 2017, Laurie Niles speaks to former students about the legendary pedagogue’s teaching methods 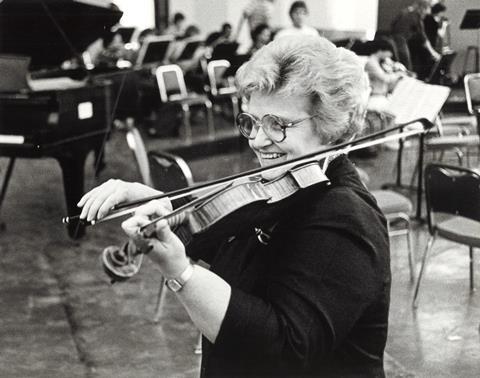 The following is an extract from The Strad’s September 2017 issue cover story – to read the full article, click here

Her manner with her pupils contrasted so acutely with the conventions of the time that even [Itzhak] Perlman, who studied with both Galamian and DeLay, was at first baffled by her approach. ‘Galamian was more of an old-fashioned teacher, like my old teacher in Israel,’ says Perlman, who moved to the US in 1958 in order to study with Galamian. The first person he met and played for, however, was DeLay.

‘When I first played for Miss DeLay I was not very happy because she did not teach like my old teacher, who basically told me what to do and how to do it. Instead, she would say to me: “What do you think of that? What do you think of this? Sugar plum, what is your concept of G sharp?” It was a different attitude. Mr Galamian was more like: “You do what I say, and you’ll play well.” Which was true. Both styles, for me, were terrific. I gained a lot, I feel very lucky that I was taught by both teachers.’

[Philippe] Quint also remembers how DeLay would invite her students to think deeply about ideas and concepts – in stark contrast to his early studies in the Soviet Union. ‘Wouldn’t it be very simple to say, “G sharp is out of tune”? But she never did that. My Soviet teachers would scream, “Out of tune! Unprepared! I’m not going to teach you any more. You get out of my studio!” Throw the music out, throw the violin out, throw the case out. These sorts of brutal teaching methods consistently brought incredible results, but they also crashed a lot of students. Psychologically, this was truly a case of “only the strongest survive”.’

Watch: Perlman on the golden era of the violin school

In DeLay’s studio everyone survived, and her psychological approach became her most enduring legacy. Perlman continues: ‘At first I did not like what she was doing, because I wasn’t used to it. And then I wound up teaching the way that she taught.’

Since taking the Dorothy Richard Starling Foundation Chair, he has taught in DeLay’s old studio at Juilliard, where he has kept DeLay’s couch, the toy animals given to her by her students, and even the last can of V8 juice she left in the little fridge. ‘I don’t teach exactly like she did but my attitude – my philosophy – is to involve the students, which was her philosophy.’

Another former DeLay student, Chee-Yun, remembers: ‘Instead of just telling me what to do – how to phrase a passage, or which fingerings to use – she would ask me what I wanted to do, and the reason behind it. She taught me to believe in myself and not just to rely on other artists’ recordings and copy their ideas. She also made sure I did thorough research on a piece: the composer’s life, the background story of the composition, what else was happening in the world when it was written and so on. She taught me the importance of an analytical approach.’