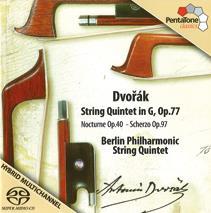 The comparative neglect of Dvo?ák’s glorious G major String Quintet is almost entirely due to its unusual scoring for two violins, viola, cello and double bass. Premiered by an ensemble led by František Ond?í?ek (who also gave the premiere of Dvo?ák’s Violin Concerto), the work originally had five movements. The planned Intermezzo was dropped before publication and later became the Nocturne for Strings in B major, which is also included here.

At only 46 minutes, this disc may be short on quantity, but the luxurious quality of the Berliners’ playing and PentaTone’s resplendent engineering (especially telling on the SACD surround-sound layer) more than make amends. Musical ideas are shared between the players (and by extension with their audience) in such a way as to create the impression of an emotional narrative unfolding. Experiencing the way the Berlin players rejoice in the opening movement’s surging recapitulation is akin to a diver breaking the water’s surface to fill his lungs with air.

The tantalising sense of expectation conveyed at the start of the finale is another passage in which this legendary ensemble’s exultant phrasing, exemplary technical finesse and exquisite beauty of sound combine to scintillating effect. An outstanding release in every way.