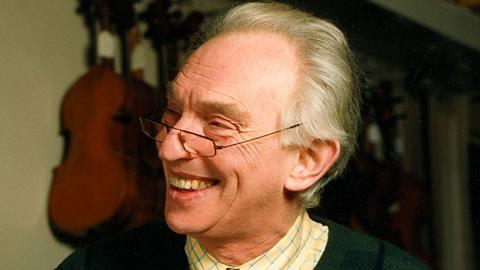 Dutch luthier and restorer Frederick Lindeman has died aged 84. Born in 1932, he learnt the craft of violin making from his father, the self-taught maker Jan Lindeman. From 1952 he worked in his father’s workshop, first as his apprentice and, five years later, becoming a partner in the firm. Upon the senior Lindeman’s death in 1971 he continued the business under his own name.

In the mid-1960s Lindeman grew interested in the burgeoning genre of historically informed performance, and began to specialise in the re-conversion of modernised stringed instruments to their original Baroque state. This work eventually resulted in the publication, in 2011, of his first book, 'The Rebirth of the Baroque Violin'. This was followed by a book collecting Lindeman’s thoughts on sound production, 'Tussen Grond- en Boventonen' (‘Between tones and overtones’), published in 2016.

Among Lindeman’s notable achievements were the restoration of the ‘Gould’ Stradivari for the New York Metropolitan Museum of Art in 1975. The work, suggested by Belgian violinist Sigiswald Kuijken, involved the addition of a historically accurate fingerboard and tailpiece, a shorter neck and bass-bar, and a new soundpost, pegs and bridge. The ‘Gould’ is still used by Baroque violinists for concerts at the Met.

Lindeman was forced to retire from making and restoration in 2007, owing to health problems. ‘Not only was he a gifted craftsman, but his warm-hearted approach towards his clientele made every musician a lifelong friend,’ recalled fellow luthier Mathijs Heyligers. ‘He remained the reference for any Baroque musician in every corner of the world, sending Baroque strings anywhere accompanied by his precious comments.’

'Fred was one of the driving forces behind the development of serious restoration of violins in the Netherlands,’ said Dutch maker Bas Maas. 'The man was a walking encyclopaedia, and his stories of the 'old guys' were often amusing. He was very welcoming, open-minded, warm and generous, always willing to help out with identification of violins. My personal memorable moment was of his enthusiasm and cooperation as a juror in a 'fiddle race' event I organised with Chaim Achttienribbe in 2004. He was very encouraging from the start – he prepared a great text for the diploma for all the participants, which was about creative freedom, cooperation and the hope that events like this could lift the level of violin making in general. I believe it says a lot about Fred. He had a true passion for the craft, violins and the wishes of musicians.'