Digital Amati: a computer program putting luthiers back in touch with ancient principles

A decade ago, François Denis’s Traité de Lutherie showed how the old Italians used Euclidean geometry to design their instruments. Now a computer program based on these principles allows luthiers to construct and adapt patterns quickly and easily. Its creator, Harry Mairson, explains the genesis of Digital Amati 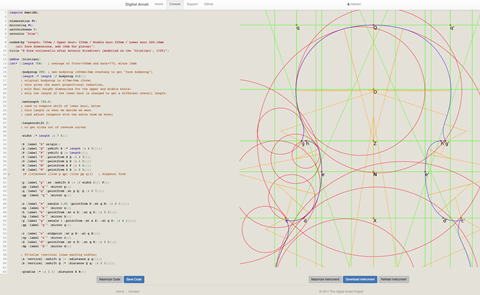 The Digital Amati software in action: computer code on the left describes the geometric constructions on the right

The following is published as part of a longer article by Harry Mairson in The Strad’s September 2017 issue, out now – download the issue on desktop computer or via the The Strad App, or buy the print edition.

Understanding the principles behind the Digital Amati project can be quite challenging at first glance; however, they are all based on Euclidean geometry, taught in schools since time immemorial. It is perhaps extraordinary that for the past 300 years, violin makers have adhered so closely to the works of the Italian masters without understanding the geometric principles behind them. Stradivari made his 1716 ‘Messiah’; Vuillaume made exact copies of it, and many makers after him carried on in the same vein. Sam Zygmuntowicz has joked that thanks to inevitable ‘pencil creep’, 19th-century French violins slowly increased in size as their makers slavishly traced each other’s templates to make new ones. 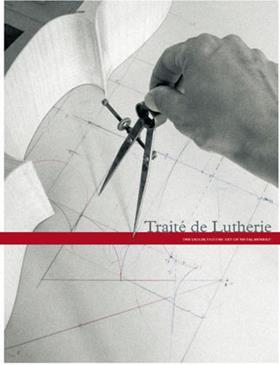 The inspiration for Digital Amati came from François Denis’s revolutionary 2006 book Traité de Lutherie: the violin and the art of measurement. In it, Denis took important steps towards integrating the dual, refined skills of design and copying – two stages that he refers to as the ‘classical’ and ‘romantic’ eras of violin making. Through the careful reverse-engineering of particular stringed instruments, using only the geometric constructions possible with a straightedge and compass – most significantly the idea of using Euclidean, proportional methods – Denis provided a vocabulary and a geometric vernacular for their conception and creation. As a consequence, he put an important and practical analytical tool in the hands of every luthier.

Traité de Lutherie is one of the best books I’ve ever read: a polyglot potpourri of art and architecture, mathematics and musicology, philosophy, history, and science. When the Ashmolean Museum had its blockbuster exhibition of Stradivari instruments in 2013, its catalogue paid implicit yet unmistakable homage to Denis’s contribution: it read, ‘It is now recognised that what first distinguished Cremonese instruments from those made in other centres was a geometric formality of design and proportion borrowed straight from the architects, painters and many other designers and craftsmen of the Renaissance.’ 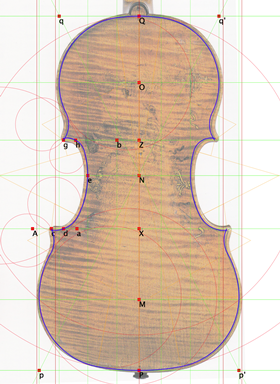 A re-creation of the first complete violin form in Traité de Lutherie, showing how measurements of a c.1560 Andrea Amati rid structure differ from those of an average ouline

A generation earlier, the author and craftsman Kevin Coates wrote in his 1985 book Geometry, Proportion, and the Art of Lutherie, that ‘lutherie will never again achieve the same grace of enlightenment, of genuine creativity, unless it can return to […] the lost principles that nourished the genius we now mindlessly, or rather, soullessly, seek to replicate’. Denis’s contribution was a timely, informed response to Coates’s critical assessment. It has given us a greater insight into what some of those principles were: fundamental geometric ideas, utilised and shared by Renaissance artists and craftsmen, which also grounded the creations of luthiers. Their collective work was not only a beautiful product of artistic imagination: it was principled, and based on geometric methods.

To read the full article by Harry Mairson, download The Strad’s September 2017 issue on desktop computer or via the The Strad App, or buy the print edition.