Developing a natural and relaxed approach to string playing - part 1 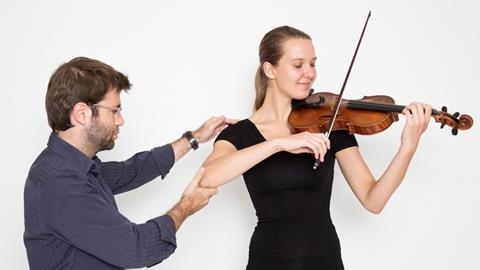 The goal of the following exercises is to help students experience new kinesthetic feelings. These practical methods allow students to crack subconscious habits and release tensions. Once kinesthetic feelings have been accessed, students may simply practise recalling the sensation of letting go until it becomes second nature while playing. Here are some general concepts to keep in mind while performing the following exercises:

• When concentrating on a given issue, we sometimes forget that any motion is the result of a global approach. While it is beneficial to isolate movements during exercises, we must also incorporate the entire body early on and retain our perception of the whole body.

• When practising, avoid repeating and repeating and repeating in the hope of achieving an 'automatic' response that will simply 'happen' during a performance. Performing is like driving in a NASCAR race. You need to be concentrating in the present, driving from scratch on the day of the race. It is necessary to execute passages in the moment, receiving constant, live, kinesthetic feedback from your body. While it is true that our work in the practice room helps us to know ourselves better, we should not repeat passages time after time mechanically. Think of the way we learn how to walk. We don’t perform isolated motions again and again. We fall a lot, we don’t get frustrated, and we stand up again. The way that children use their bodies with much energy, yet little tension, can teach us a great deal.

• Many people tighten or set their bodies before they move in the unconscious assumption that this will improve accuracy. However, the body is considerably more accurate and comfortable when it does not tense up before initiating movement. To help correct this, the teacher can ask the student to stop in the middle of a piece, leaving the bow on the instrument. The next step is to tell the student to unlock the knees, release the neck, release the jaw, allow the arms to flow out of the back, release the twist to the left in the torso, and then continue to play. It is perfectly acceptable for the student to make one change at a time, and to eventually incorporate all of the changes simultaneously.

• Sometimes, as players, we mistakenly lock our breath for a moment without realising it. Don’t forget to breathe when you play and when you do the following exercises. Remember that for all the exercises* that follow, the goal is to experience a renewed awareness of a kinesthetic feeling, rather than looking for a specific position or a physical movement.

• Hold and let your head fall in different directions. Don’t move the head actively but let gravity take care of the force. The teacher could also guide the head, informing the student whenever resistance is felt.

• Lean your head slightly, but don’t squeeze on the violin. Experiment with how little is necessary to ‘hold’ the violin. 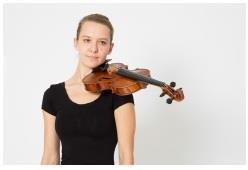 • Play with you head off of the chin rest (not leaning on the violin).

• Speak/read while playing to make sure that you are not crunching your teeth. 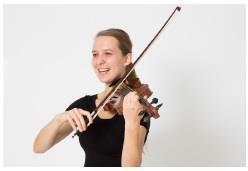 • Lean the left elbow on a piano or stand. Focus on letting go of the weight of the arm and enjoying the support. Ask someone to hold your arm and let the weight go. Get feedback as to whether you are actually releasing or not. Experience the difference between pressing down and letting fall. Change roles.

• Balance your left elbow in and out to make sure it's not stuck in an unfavorable position.

• Holding the violin: without the instrument, leave your hand loose, falling away from your body. Remember that feeling when you hold the violin. 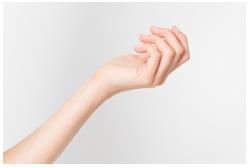 • Don’t squeeze the left hand. Use the hinges like the hammers of a piano. Similar to holding a glass of water, don’t press more than is necessary. This point applies also to the right hand. 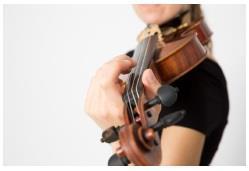 • Practise relaxing the left hand by placing a highlighter or cork in between the thumb and the neck as well as between the fingers and the string. You could also place a small toy mouse in between, making sure you don’t squeeze it too tightly.

• Be aware that the main movement of the fingers in the left hand happens in the joint between the base of the fingers and the palm. Many people’s initial awareness of that joint is limited and inaccurate. While most people would initially point at the line where the palm of their hand meets the base of the fingers, when we watch our hands from the side, we realize that the joints are actually lower than that. Even further, if we consider the skeleton, we remember that the bones of the fingers actually begin at the wrist. Having this awareness of the actual location of the joints can help us understand and feel how the motions and the expansion of the hand work and can also improve how we use it.

• Release your left thumb every once in a while. Move it around to make sure it’s relaxed and helping the rest of the fingers instead of holding on for dear life from a cliff or choking the neck of the violin.

Some concepts are described in greater depth in the following articles:

Dr Tomas Cotik teaches at Portland State University. He regularly gives masterclasses and lectures throughout the US. Hailed by Michael Tilson Thomas as ‘an excellent violinist’, Tomas Cotik was a first-prize winner at the National Broadcast Music Competition in his native Argentina in 1997, and the winner of the Government of Canada Award for 2003-2005. A prolific recording artist, Dr Cotik is currently involved with more than a dozen CDs, which include Schubert’s complete works for violin and piano and Mozart’s 16 sonatas. A former rotating concertmaster of the New World Symphony, Cotik has worked closely with members of the Cleveland, Miami, Pro Arte, Vogler, Vermeer, Tokyo and Endellion String Quartets. Dr Cotik is a currently a member of the Cotik/Lin duo.