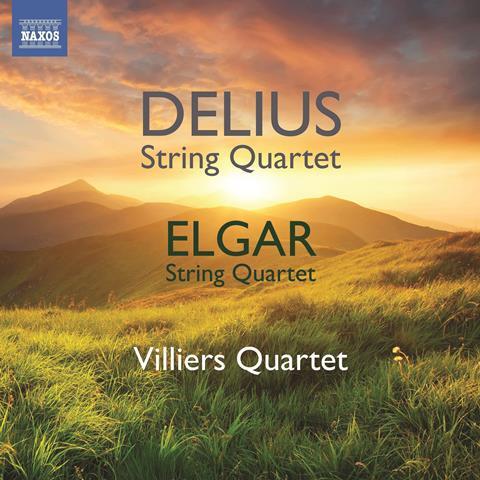 The Delius Quartet is so strikingly imaginative that its relative neglect seems unfathomable, especially when it is played with such affectionate warmth and understanding as here. Taking Delius’s intonationally taxing chromatic harmonies and tantalising interpretative dichotomy of expressive ripeness and motivic economy in their stride, the Villiers Quartet musicians impart a compelling sense of direction to even the most elusive of phrases. If the general tendency with this score is to play it slightly cool, such is the degree of voluptuous sensuality already built into its aching suspensions, the Villiers musicians open their hearts, mining the music’s expressive core with a Barbirolli-like sense of awe and wonder. Invaluably, they also include Delius’s original opening movement and the first (very different) version of the ‘Late Swallows’ third movement, as expertly reconstructed by Daniel Grimley.  The Elgar Quartet is another work that has proved stubbornly elusive on disc. As in so much music that grew out of the First World War period, a feeling of tension between syntax and semantics prevails, with the promise of a ‘big tune’ being continually frustrated by an exquisite sense of contextual restraint. Again, the Villiers balances expressive intensity with a chamber-scale introspection that draws the listener in, enhanced by a discreetly atmospheric yet detailed sound picture.  JULIAN HAYLOCK