By divorcing technique from the music, we prevent the bow from becoming an extension of our right arm and hand, writes John Crawford 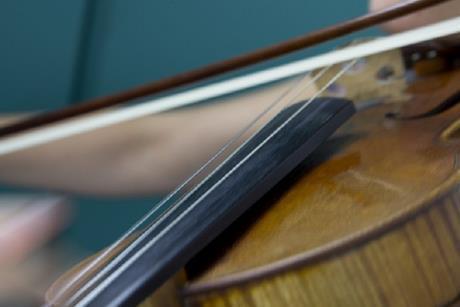 I recently read an article in Scientific American online which presented convincing evidence that a tool or other object held in the hand can become integrated into the body image, and therefore effectively absorbed into the sense of self. This immediately resonated with me and brought to mind philosopher Maurice Merleau-Ponty’s suggestion that one’s instrument can become part of one’s sense of wholeness, rather than remaining an external object which needs manipulation. Even complex everyday actions such as eating and writing have a quality of simplicity in which hand, arm, tool and movement become one, totally subservient to the needs of the moment. Can we learn something from this about our attitude to the bow and its use?

Of course, fundamental skills must be acquired, but so often these seem to lose any connection with their aim and instead become goals in themselves, divorced from music making and all the variety of sound and articulation required. The movements, angles and levels are analysed and segmented to such an extent that the chance of integrating player, bow and sound is negated.

I can’t imagine Rembrandt keeping his wrist at a right angle while executing the infinitely subtle movements of his artist’s brush. One inspiration for this article was watching an eminent violinist instructing a student to ‘practise in front of the mirror to make sure there is always a line from the upper arm to the fingers’. The equivalent for Rembrandt would be listening to the sound of the brush as a guide to its movements! Advice like this ensures that not only the bow but also the right arm becomes an object to be manipulated, guided not by sound and expressive need but by external elements.

While serving on the panel for a recent set of auditions I was struck by how many candidates expressed the view that their bow technique was deficient. On further questioning, it was evident that they believed there exists a correct bow technique which they need to acquire. Not one mentioned a lack of expressive content or beauty of sound which could motivate the change; quite the contrary, most expressed satisfaction with the expressive range of their playing.

Read Opinion: On the margins

Even a cursory look at eminent violinists’ playing shows a wide variety of techniques: bow hold, arm angles, finger movements and so on. The one thing they have in common is that the bow is serving the needs of the music and leading the movements of the arm. Surely the only meaningful criteria for the evaluation of bow technique are whether the player’s vision is being fulfilled and whether the movements being made are free of unnecessary effort.

Experience over many years tells me that when the music is leading the bow movement, and the bow therefore becomes integrated into the sense of self, the movements are inherently natural and unstressed. Any other approach is increasingly likely to encourage what University of Nevada professor Gabriele Wulf calls ‘micro-choking’: when movements that should be reflex responses to an external demand are analysed and put under conscious control.

Perhaps I am being naive and idealistic in hoping that complex bowing skills can be developed in response to an expressive need. Certainly, our increasing obsession with ‘technique’ as a concept in itself needs to be examined. Technique without the expressive demands of the music is meaningless. Let’s try to avoid putting the cart before the horse, and at least encourage the possibility that the bow could cease to be an object and become part of a seamless link between imagination and sound.