Although nervous energy can lead to inspired playing, it can also result in performance anxiety – unless we find ways to control it, writes cellist Laura van der Heijden 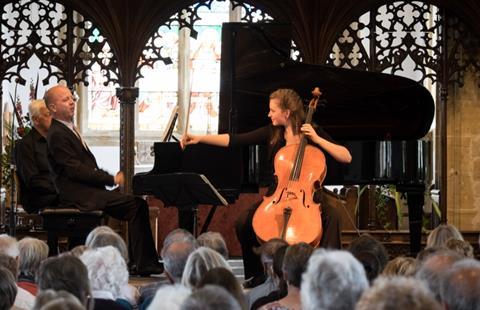 Performance anxiety has been on my mind for many years. I find it both a fascinating topic and a very real issue that I must tackle myself. It regularly comes up in conversations with other performers, and so often is approached with embarrassment, fear and shame. Performers worry that being open about their anxieties will ruin the illusion of effortlessness in performance, and even may threaten their employability. Lately, however, I’ve noticed that there is a growing culture of transparency as the desire to be open about our vulnerabilities has increased, and the space in which performers are received is more ready to be accepting. As with any type of anxiety, performance anxiety is personal and different for each artist. Nerves are a natural and understandable reaction to being in what is objectively quite a stressful situation, and can also be an important positive force in performance.

It has been interesting to spend time thinking about performance anxiety during the pandemic, particularly since (for the first time since I began my professional life) it has involved a very serious break from performing. I’m aware that this enforced sabbatical has affected many performers differently; some have been inspired to create more than ever, while others have lost their motivation to play without the goal of dates in the diary. I have found myself more in the latter group, but am grateful to witness colleagues bringing joy and music to us via social media on a regular basis. We have felt it necessary during this time to define what we regard as essential work, and live performance/art has not made the cut. I want to highlight the huge impact of prohibiting and failing to support performers’ work. Thankfully, there have been people and institutions trying to find ways forward against all odds.

In my experience, artists find it difficult to separate their personal identity from their art. The relentless work and dedication needed from a very young age to become a professional artist, and the lack of demarcation between working and non-working hours probably contribute to this. This symbiosis of ‘home’ and ‘work’ life can be a beautiful thing, but it can also result in severe self-criticism, and the persistent feeling that if you don’t succeed in your art, who you are as a person must also be flawed. Over-identification with professional achievements may also be a reason that performance anxiety can become problematic.

The enforced break has in some ways provided me with the opportunity to re-evaluate my relationship with music and performance. For a while I felt liberated from the anxieties of performance, and enjoyed exploring music like I did when I was a child: with curiosity, kindness and joy. I was asked to film a few projects during lockdown, and was determined to hold on to this rediscovered freedom, as it undoubtedly inspired my playing and deepened my own satisfaction. However, as soon as the red light came on, the pressure and tightness returned. This reaction made such an impression on me that I devoted some time to exploring the issue within myself.

The issue of performance anxiety is very complex, as it involves a very fine balance between performance-enhancing adrenaline, and performance-disrupting fear. I have definitely experienced the extremes of both of those states. If the adrenaline kicks in at the right level, it can lead to exhilarating, inspired, and deeply satisfying performances. On the other hand, I’ve heard many traumatic anecdotes of occasions when friends’ performance anxiety got out of control. So often, these stand-alone traumatic moments shape our relationship with our performance anxiety. My manifestation of performance anxiety is mostly about memory, which I can trace back to one of my first concerto performances when I was about 11. I had a huge memory-slip and did not yet know how to recover quickly, so ended up playing an open A for what felt like an absolute age. The fear pushed me to really think about ways in which I can manage and calm my own psyche.

There are a few methods I have found to be helpful, but before going into those I think it is useful to discuss some more general points. Being a performer involves life-long learning and self-improvement. Like the adrenaline of nerves, a fine balance is required between accepting where you are in that moment, and the drive to improve.

I used to swing between too much acceptance (resulting in laziness and complacency) and too much self-criticism (leading to stress and self-hatred). I have found it beneficial to search for a good balance in three ways:

Another major part of performanceanxiety is focus: where it’s aimed, how intense it is, and how it’s applied. It can be a helpful tool of self-trickery.

For example, if a particular shift is making you anxious in performance (and assuming you mastered it in practice), in the moment of the shift, focus away from the fear and on something else entirely; focus on your body, your breath, or think about what you had for lunch. It is often over-thinking and self-analysis that hinders success in performance.

Shifting focus can also be useful during preparation: an example of this is a process I went through with Haydn’s Cello Concerto in C. It’s a piece I’ve played quite a lot, and continually tried to refine. The pursuit of ‘perfection’ made me more and more nervous in concert, and also made me lose sight of my feelings about the piece, which are that it should be fresh, rustic, and joyful. Over-complication made achieving this character very difficult, and I was constantly dissatisfied with the result. I needed to refocus on character rather than perfection.

’It is not all about you, you are just the medium for the composer’s message to the audience.’

Common advice regarding performance anxiety is to shift the focus away from yourself and towards the piece and/or the composer. If you have ever performed anything in your life, you will most likely be familiar with the sensation of standing under a glaring spotlight, feeling that all eyes are on you. Focusing on the composer’s intentions can be a very helpful tool to combat this. It can, however, also result in the opposite: the pressure of ‘doing justice’ to a well known work, for example, can increase performance anxiety.

I personally find this approach too reductive and for me it doesn’t reflect the wonderfully complex web of relations between performer, composer and audience. Ultimately, it is up to each individual performer to decide how they view the hierarchy of these components, and whether they wish to consciously place their art within a hierarchical structure at all.

Dealing with performance anxiety can benefit from targeted approaches: either targeting the symptom (ie: memory slips, shaky limbs, over-cautiousness), or the underlying fear (ie: feelings of inadequacy, fear of rejection, fear of taking space). The first approach is probably a more immediately attainable goal, and can help resolve the underlying issues. It is quite rare to have a ‘eureka moment’; much more realistic is a slow, steady path, breaking the aim down into achievable steps. This is what I did to deal with my fear of memory slips; I approached my preparation from many different angles:

I also decided on a small shift in attitude: instead of aiming for a memory-slip-free concert and then being upset if that didn’t happen, I established that one memory-slip would happen anyway, and once that slip had happened, I could allow myself to relax (this mostly worked!).

Right before a performance, I’ve found it helpful to have a little ritual that is flexible enough not to unsettle me too much if I’m not able to execute it fully. This involves getting myself concert ready (getting dressed and doing my makeup) at least half an hour to an hour before the concert starts, so that I have plenty of time to warm up and be with the instrument. Before that, I like to have a short power nap. Bananas are also a performer’s friend! Before a concert, the adrenaline can often result in excess nervous energy, which leads to an uncentered body (shallow breathing in the chest rather than from the diaphragm), and also for many, shaky limbs. One way to help this is with breathing exercises (Elena Urioste of Intermission has lots of helpful exercises and information for musicians on anything body/breathing related), and another is to use up a bit of that energy: to run around, or to shout/sing very loudly. I have found the latter quite liberating, even though it may not be the most pleasant thing for anyone in a neighbouring green room!

Once I’m on stage, I also go through a few processes I find helpful:

Finding the right balance of methods to help you with your performance anxiety can be a long journey; everyone responds differently and finds different things useful. One of the most helpful things to take in, however, is that we’re always prone to thinking we’re alone in the struggle with performance anxiety, and that everyone else copes so much better - but this isn’t reality. Sharing your worries with others and realising they have similar fears can be very comforting.