Learning to play harmonics early on has many potential benefits for beginner string players, as Naomi Yandell observes 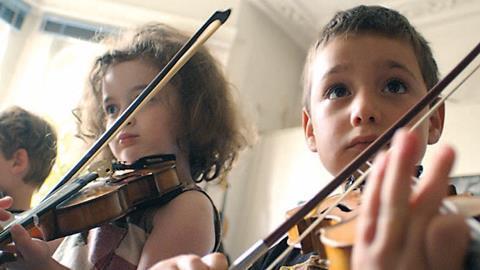 Such a lot seems to have happened since the advent of Covid-19 that it feels like an eternity since I was last in a real classroom teaching my string groups at school. In one of the last sessions with my six- and seven-year-olds, we were tackling a piece called Look at the Starlight from the Take Your Bow series. It is an atmospheric piece accompanied by high-register cluster chords in the piano part that give an unworldly cosmic feel. It can be taught across all beginner strings, from violin to double bass.

There was a sense of excitement (and jubilation, even) when I introduced the harmonic glissandos that come halfway through the piece. Unfortunately, it didn’t last long. While the cellists and double bassists, used to playing harmonics from very early on, were happily touching their D strings and floating their hands up to the top of the fingerboard and back down again, the violinists were clearly struggling. Back then (in early March) I had no compunction about going over to the nearest violinist to guide his arm to help him feel the sensation of moving up to the top of the fingerboard as he touched the string. I confess I wasn’t too surprised to find that his left hand was firmly clamped on to the neck – no wonder it wasn’t going anywhere.

I know gliding up and down the string is easier for cellists and bassists; they have to move a lot further, but they can see what they are doing and the movement seems more natural. I also know that teaching young players to hold the violin isn’t the simplest undertaking. However, as I attempted to take everyone back to playing a single harmonic halfway along the string it seemed that none of the violinists in my group (each taught by a different violin teacher) had ever encountered them before. They seemed wary of moving their left hands away from first position, rather like beginner pianists who are too used to playing around middle C. Of course, it is entirely possible that they had been shown how to play harmonics by their teachers, but had forgotten how to do it. I don’t mean to point fingers; I’m merely observing that I wish harmonics were taught more often in the early stages.

There’s so much to be gained from feeling comfortable around a stringed instrument – and harmonics seem to offer an ideal starting point for good left-hand technique. Because the finger just touches the string, the thumb tends not to clamp on to the neck, and there is a sense of ease in shifting the hand from one place to another; the teacher can then focus attention on forming good arm and finger shapes without generating tension in the hand. There’s a bonus, too, in that the student feels comfortable playing at the top of the instrument from an early stage. Exploration of the fingerboard becomes comparatively effortless. Of course, harmonics sound better with a straight bow near the bridge, which is also a helpful lesson.

I recently had a meeting (you guessed it, on Zoom) with some teachers at another of my schools, where we discussed the upcoming academic year. We began contemplating the efficacy of teaching young beginners online from the very start. It felt scary, for while we’d had time to develop a rapport in person with our youngest students by the time lockdown came, this would be something else entirely. The questions came thick and fast. Will the parents want to enrol their children for lessons? How will we size the instruments to the children? Will it be possible to teach a good bow hold online? And many more. To put it bluntly, this is uncharted territory. However, if we do try starting a new cohort of beginner strings online, I for one will be teaching harmonics early on, so that I minimise the risk of seeing left hands clamped on to necks when I finally meet them in person.