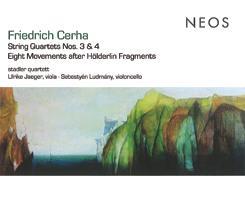 The Salzburg-based Stadler Quartet has an impressive track record in contemporary music, and it shows in this disc of music for string quartet by the senior Austrian composer Friedrich Cerha. The Stadler players couldn’t have picked more contrasting material: the Third Quartet (1992) is in six short movements, each vividly characterised and highly contrasting with the others, whereas the Fourth Quartet (2001) is a single-movement work with a strong sense of organic development throughout.

They give compelling accounts of the Third Quartet’s strange, expressionistic landscapes, whether the aggressive, spiky melodies of the first movement or the slithery ponticello texture of the second. There’s a sense of deliberateness to their playing – it’s well rehearsed and impeccably delivered, but perhaps lacks a certain degree of spontaneity. However, the foursome’s rhythmic bite and incisive ensemble playing more than make up for that.

They pace the Fourth Quartet’s evolving ideas with supple precision, producing a broad yet steely sound for its opulent opening, for example, but refusing to wallow in its heavily perfumed harmonies. The Eight Movements after Hölderlin Fragments for string sextet are based around speech melodies Cerha derived from lines by the great German lyric poet. It’s a very evocative piece, again given a compelling performance: the sense of boiling rage in the second-movement condemnation of human failings is spine-tingling. The recordings are very close, bringing a thrilling immediacy to the performances but also picking up quite a lot of distracting sniffs, breaths and other extraneous sounds.