Awarded jointly by the Canada Council for the Arts and the National Youth Orchestra of Canada, the prize is awarded to Canadian musicians aged between 16 and 20 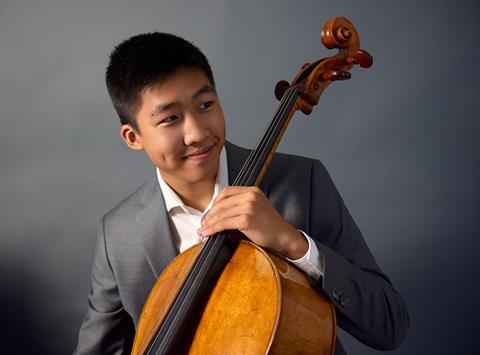 Cellist Bryan Cheng has been awarded the 2017 Michael Measures Prize, worth CAD $25,000. Awarded jointly by the Canada Council for the Arts and the National Youth Orchestra of Canada, the prize is awarded to musicians aged between 16 and 20 who are enrolled in the summer training programme of NYO Canada.

‘I’m extremely honoured to be the recipient of the Michael Measures Prize!’ said Cheng. ‘I also realise how very fortunate I am as a Canadian to receive support like this that enables me to pursue my dreams – I feel even more inspired and invigorated. I’m looking forward to continuing to polish my craft and share the beauty of classical music with audiences not only in this wonderful country, but also those far and beyond!’

Born in Ottawa, 19-year-old Cheng made his recital debut at Carnegie Hall at the age of 14. He was named one of CBC Music’s ’30 hot Canadian classical musicians under 30′ in 2015 and a CBC Young Artist of 2014. He has won first prize at the National Arts Centre Orchestra Bursary Competition, Canadian Music Competition, and Ontario Music Federation Association Competition.