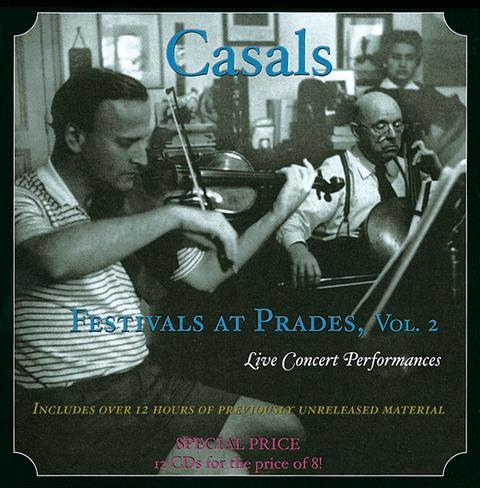 I sometimes wonder if with these retrospective collections of great artists we’re not turning into bargain hunters, snapping up anything they happen to have performed or recorded no matter what the quality. Certainly this second volume of live performances from the Prades Festival offers a very mixed range of material and somewhat variable recording quality. One should also note that quite a lot of the CDs are not directly related to string playing.

For Casals aficionados the previously unreleased 1958 recording of the Brahms E minor Sonata with Mieczislaw Horszowski is probably the item that will ignite most interest, but I found this disappointing. Despite the fact that the sonata doesn’t have a slow movement, if the opening Allegro ma non troppo is used as a substitute it invariably creaks along, as happens here. The contrapuntal finale, however, is well drawn, although missing that spark of intensity in the concluding passage that many later recordings have brought to the work. Likewise, the 1955 performances of Bach’s third and fifth cello suites lack the vitality of Casals’s classic recordings, despite the fact that the voicing and intellectual perception are always worth hearing. Indeed for me the highlights of the set are Yehudi Menuhin’s inspired readings of the Bach Solo Partitas (1955–6) and Christian Ferras partnered by Wilhelm Kempff in an electrifying rendition of Beethoven’s ‘Kreutzer’ Sonata in 1959. Granted the playing is not always immaculate, but these are live recordings in the truest sense of the word. A spirited passion also imbues the 1959 Mendelssohn Piano Trio no.2 in C minor with Ferras, Kempff and Casals. Again the ensemble is not always precise, unfortunately including the final chords, but there is so much musical integrity to compensate.

Including Casals conducting Bach cantatas does of course give us a more rounded portrait of the musician, but the style is rather heavy in articulation by today’s standards. However, Victoria de Los Angeles’s lovely singing of Schubert Lieder – idiosyncratic though it may be – is a welcome bonus and emphasises one of the crucial aspects of Casals’s own art of interpretation, namely the vocalisation of cello lines. Whether performing chamber music, solo sonatas or indeed duo repertory, this aspect always characterises his playing, along with his humble yet formidable musicianship.