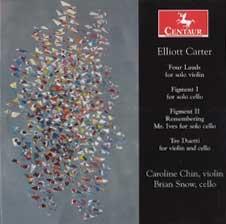 First things first: at just 38 minutes, this is an extremely short disc. But by the end of its thoughtful, jewel-like accounts of some of Elliott Carter’s later works for solo and duo strings, that length feels about right. This isn’t easy music – listeners and players alike are expected to negotiate Carter’s multiple levels of musical comprehensibility and fearsome technical demands – but US new-music specialists Caroline Chin and Brian Snow deliver it with impeccable precision and commitment.

Chin gives quite a restrained performance of the Four Lauds, with a wonderfully expressive sound and quicksilver changes of direction that match Carter’s unpredictable shifts of mood. But there’s something rather narrow about her dynamic and expressive range, as if she’s holding back. Snow is equally alive to the everchanging ideas in Carter’s Figment I and Figment II, almost making the composer’s technical challenges sound too easy. He leads the listener on an expert course through this enigmatic music, though, and he’s in his element in the fragile harmonic glissandos of Figment II’s more introspective second section.

Chin and Snow come together for a vivid account of the Tre duetti, always finding the music behind Carter’s compositional complexity, yet keeping things balanced and elegant throughout – sometimes, it has to be said, a touch too much so. Recorded sound is close, yet warm and faithful.