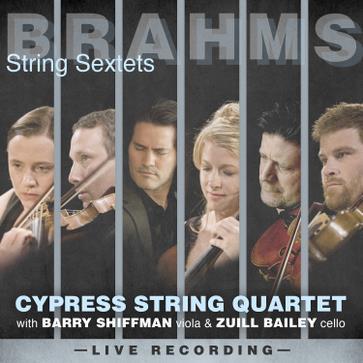 Formed in 1996, the San Francisco-based Cypress Quartet decided to call it a day in 2016 after two decades together. As a newcomer to their work I now find myself joining the farewell party, of which this disc is a memento. The two Brahms sextets provided a good opportunity for inviting colleagues Barry Shiffman and Zuill Bailey to join the core team, and the recording was made ‘in front of a live studio audience’ between 26 and 30 April last year at the Scoring Stage of Skywalker Sound in California. This information raises two questions: how many ‘live’ performances over the five days were spliced to create this final disc, and how many ‘live’ audiences were involved? It is difficult to detect the presence of any audience members – dead or alive – in the studio, so silent and presence-free are they.

Technically, the playing itself is remarkably clean; in fact spookily so: there is no emotion or passion behind the surface command. This lack of engagement is somehow enhanced by the weirdly clinical sound of the recording itself. A note by the quartet points to the decision to record live as an attempt ‘to truly capture the freedom and spontaneity that come so naturally in performance’. If this is so, I dread to think what a closed studio account would be like. This glorious music lives and breathes those very qualities of freedom and spontaneity but they have been locked outside here. Strictly for friends and family only, I’m afraid.