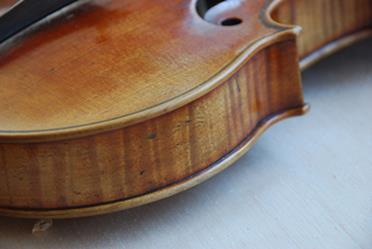 A Stradivari copy made by participants of the Violin Society of America's Oberlin violin makers workshop has joined the musical instrument collection of the Library of Congress.

The copy (left) of the 1704 'Betts' Stradivari was formally donated to the Washington DC institution on 28 February by the owners, William Sloan and Judy Sloan. The Library of Congress has housed the 'Betts', one of the Cremonese master's greatest violins, in its collection since the 1930s.

The project to make a copy of the 'Betts' began with radiologist Steve Sirr and maker John Waddle taking CT scans of the original Stradivari violin. Luthier Steve Rossow then took the information from the CT scans and made accurate copies of the wooden parts of the 'Betts' using a specially designed CNC (computer numerical controlled) machine.

Using these as a basis, a copy of the 'Betts' was completed by hand in the white by participants of the 2011 Oberlin workshop, under the direction of maker–instructors Gregg Alf, John Montgomery, Raymond Schryer and Sam Zygmuntowicz. The instrument was then varnished by Antoine Nédélec and Jeff Phillips at the 2012 workshop, where participants also completed a second 'Betts' copy in the white.

The Library of Congress's new 'Betts' copy, known as the 'Oberlin Betts', will be heard in a performance on 20 April in the Library's Whittall Pavilion. The instrument will be played by Gregory Walker, who gives the world premiere of Bleu for solo violin, by his father, the Pulitzer Prize-winning composer George Walker.

The Library will also host a panel discussion about the 'Betts' project on 18 April, prior to a concert by the Pavel Haas Quartet. John Waddle, Steve Sirr, John Montgomery, Antoine Nédélec, Jeff Phillips and Oberlin workshop director Christopher Germain will be present to discuss the making of the copy.

According to Carol Lynn Ward-Bamford, the Library's curator for musical instruments, the 'Oberlin Betts' is available to be seen and studied, but there are no plans as yet to exhibit it permanently next to the 'Betts'.

To read Raymond Schryer's account of the 'Betts' project at the 2012 Oberlin workshop, download the November 2012 issue.