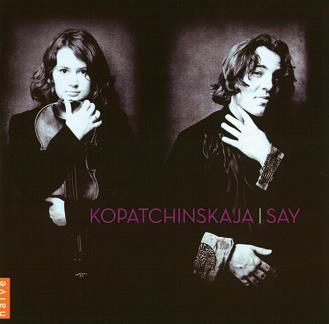 Patricia Kopatchinskaya, making her CD debut, was born in Moldavia and musically educated in Vienna and Bern. Winner of the International Henryk Szerying Competition in 2000, she represented Austria in the ‘Rising Stars’ concert series on both sides of the Atlantic, and has since appeared with many of the world’s famous orchestras.

After the introspective opening bars of the ‘Kreutzer’ Sonata, Kopatchinskaya drives headlong through the opening movement, as if just discovering a masterpiece she is anxious to convey. Even in the central movement’s variations the tempos are always urgent, and the final Presto is a musical whirlwind. Phrases are shaped with an often unusual and personal spontaneity, and, if at times the playing is a little rough around the edges with wayward intonation in the fast central variation, I would want this vital performance for those days when a shot of musical adrenalin is needed.

Her Ravel Sonata is more conventional, and though she revels in the mercurial brilliance of the finale, she never commands the vast range of colours found in the Vadim Repin/Boris Berezovsky recording (Erato). I do enjoy her Romanian Dances, where the rustic mood is infused with happiness.

The 1996 sonata by the pianist–composer Fazil Say, born in Turkey in 1970, is basically tonal, but spiced with a commercial modernity of the late 20th century. It is in five movements with descriptive titles, and is an immediately likeable piece, with Say’s superb accompaniment giving it a performing benchmark status. Very good sound quality.