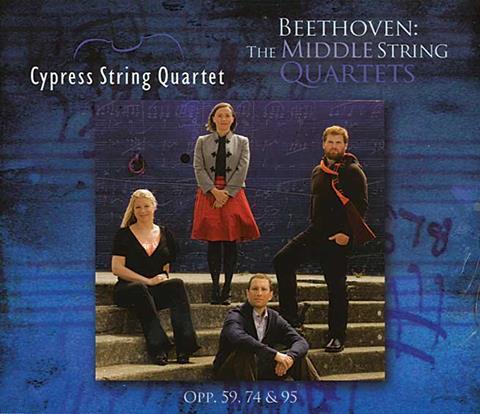 The Cypress Quartet celebrated its 15th anniversary with a three-CD set of Beethoven’s late quartets in which the playing is technically refined, if occasionally ‘underwhelming’, with ‘a degree of ordinariness’ (as reviewed in The Strad, June 2012). With the possible exception of op.74, much the same can be said about these accounts of Beethoven’s five middle-period quartets.

The quality of the recordings, made between December 2012 and July 2014, is outstanding: they have a warm ambience and excellent balance and blend. The performances are technically immaculate, unanimous in purpose, clean and precise, particularly the taut, intense account of op.95. The natural, unhurried interpretation of op.74 is also noteworthy, including an especially perceptive version of its closing variation-form Allegretto. Among my highlights of the op.59s are the badinage and skilfully negotiated exchanges in the second movement of no.1 and the urgent opening movement of no.2.

The devil here, though, is in the finer detail, particularly in this ensemble’s consistently tempered reproduction of Beethoven’s expressive indications. Broadly, pianos and pianissimos tend to be too healthy and fortissimos and sforzandos are underplayed. More specifically, the tragic opening of the third movement of op.59 no.1 is not performed piano sotto voce; neither is the third movement of op.95 mezza voce. Further, dynamic gradations – for example, from forte through più forte to fortissimo towards the end of the fugal finale of op.59 no.3 – seem to be ignored; the soulful second movement of op.59 no.3 begs for a much greater variety of shadings for optimum effect; and other ensembles find more varied ways of interpreting Beethoven’s accents, according to context, or of subtly varying the tempo. Although ‘ordinary’ would be an extremely harsh and unfair description of this set, the Cypress Quartet’s interpretations could be much more searching in their expressive range and probably do not represent its final word on these endlessly fascinating works.