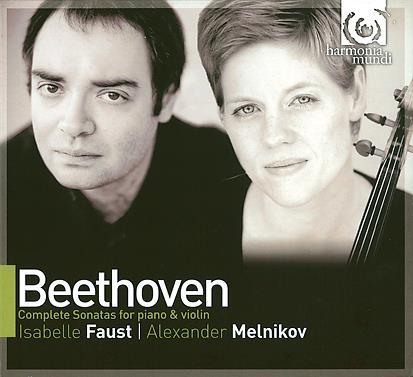 All the elements of this cycle are in place from the performance of the first movement of the first sonata op.12 no.1: a drive through to the end, within which the dwelling on a gentle phrase, the fierceness of a musical statement, are both vital and transitory; a clipped manner of delivery (which can sometimes perhaps make one wish for a little more warmth); and something that grips you and says ‘Listen!’. Which is why this is such a remarkable set of recordings. The great sonatas – in F major op.24, C minor op.30 no.2, G major op.96 and the ‘Kreutzer’ op.47 – don’t stand out here, not because the performances are not wonderful, but because they are heard to have a place in a series that demonstrates Beethoven in his so-called first period as already a composer of wonders. One example among so many: the Andante of op.12 no.2, beautifully shaped, is shown by the sheer simplicity of performance to have within it the profundity of the later works.

Phrases are sometimes vividly shaped, but for every highly coloured moment there is another to balance it: the vigour and power in the first movement of the ‘Spring’ Sonata is countered by an aching introspection in the next.

The first movement of the ‘Kreutzer’ Sonata is powerful and snappy. In the second-movement variations Isabelle Faust tells a story, drawing us breathlessly through the demisemiquavers of the second variation, making us eavesdroppers in the lively violin-and-piano dialogue of the fourth. The sheer energy of the finale, generated equally by Faust and Alexander Melnikov, would generate a smile on any grump: Beethoven’ music can be tragic, elegiac, profound, but it can also make you want to clap for joy, and here these two have the heart of it.