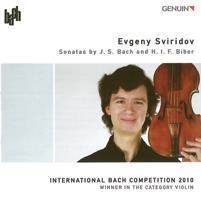 This debut recording from 2010 Leipzig Bach Competition winner Evgeny Sviridov admirably showcases his enviable technique, minute attention to detail, rhythmic vitality and subtle tonal colourings. He makes light of the technical challenges of Bach’s Third Partita and allows sufficient flexibility for the music to breathe. Thus, his Preludio is more than merely mechanically fluent, and he styles the Loure and first Menuet with appropriately idiomatic rhythmic inequality. Tempo-wise, the Gavotte and somewhat robustly attacked Bourrée seem as brisk as the final Gigue is unusually steady.

He is joined by Zita Mikijanska in two sonatas each by Bach and Biber. Sviridov is winningly lyrical in the third movement of BWV1016, and the duo performs Bach’s fast movements with invigorating rhythmic drive and clarity. Other highlights include their exhilarating Gigue and doubles, and the dramatic recitative-styled Adagio and extrovert, sometimes abrasive finale of Biber’s Fourth Sonata. In the imitative writing of Biber’s Eighth Sonata, the double-stopping is so skilfully dispatched that it’s hard to believe that Sviridov hasn’t cloned himself. Caveats include the omission of a bass continuo stringed instrument for the Biber sonatas and BWV1021. At times, too, the playing is unyielding and lacks a certain humility and tenderness. Nevertheless, this is a shining achievement, expertly recorded.