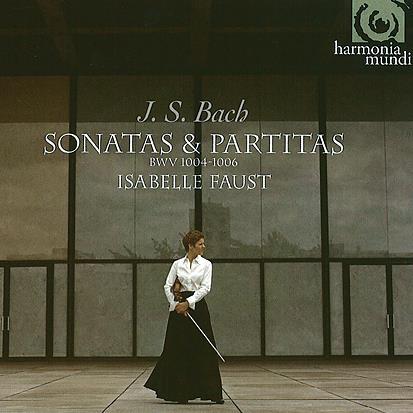 There is only one thing wrong with this beautiful CD, which is that half of Bach’s solo Sonatas and Partitas are missing. It is a situation that will surely be soon rectified with a second recording, although there is no mention of it here. What we do have are the D minor Partita with its mighty Chaconne and the E major Partita, that greatest hit of the solo violin repertoire,with the C major Sonata in between.

Isabelle Faust, with the knowledge of period-instrument performance thoroughly assimilated, plays with astonishing simplicity. The clear, focused tone, resonant in this generous acoustic, is aided only by the lightest touches of vibrato, while rubato gives shape but never intrudes. Her principal style of playing is an eloquent détaché. Even the greatest accumulations of multiple stops remain elegant – no hefty crunches here – and the essential legato is always maintained; the counterpoint of the C major fugue is masterly.

There is springing energy in the dance movements. Such is the delightful detail of her playing; underpinning it is a surety of shape and structure that reaches its apogee in the Chaconne, developing inexorably to its final thrilling grandeur, when she lets loose the full voice of her 1704 Stradivari.