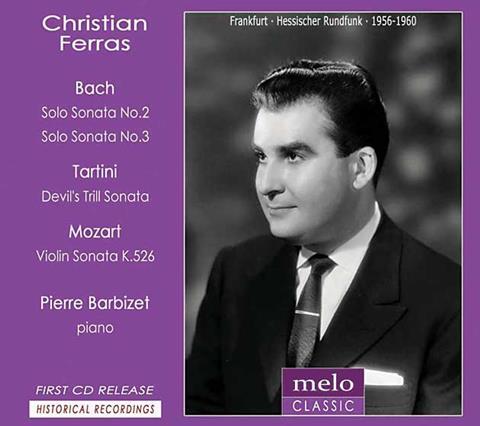 A disc of Christian Ferras (1933–82) on the Meloclassic label devoted to unissued concert and broadcast performances by historical artists (in this case well recorded for Hesse Radio in Germany between
1956 and 1960) features towering interpretations of unaccompanied Bach. Vibrato is often high-octane and the implacably imposing A minor Fugue and Allegro allow for little light and shade. Still, the edifices of sound Ferras achieves are often glorious and the slow movements nearly ache with his acute sensitivity. The C major Sonata is on a higher plane, the poignancy of the Adagio and the vitality of the Fugue’s voices evocative of Bach’s Passions. One may well dispute aspects of style, but this is Bach in flesh and blood – profoundly humane and stirring stuff.

The Mozart Sonata is more tempered, both vigorous and elegant, with ever-vivid interaction between Ferras and his marvellous partner Pierre Barbizet, and just a hint of pathos in lyrical phrases. The jewel in the disc’s crown is the stupendous account of the ‘Devil’s Trill’ Sonata, brimming with skill and imagination. Ferras’s unique blend of refinement and demonic intensity is at its apex, and Barbizet’s support is superb.

Meloclassic boasts a rich and growing catalogue of exceptional interest. Recent releases include great performances by Henry Merckel, Michèle Auclair, René Benedetti and many other, often-forgotten artists. I urge readers to discover them.