Ask the Experts: how effective are stringed instrument 'playing-in' devices?

Strad readers submit their problems and queries about string playing, teaching or making to our experts 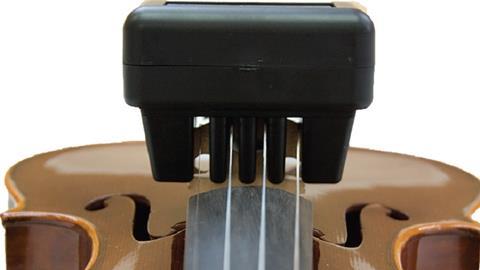 A reader with a new instrument has a two-pronged question: how can he reduce its brightness, and is it worth investing in a playing-in device?

The dilemma I have a new violin, which I commissioned at the beginning of last year and received a few months ago. At the moment the tone is brighter than I had hoped. I wonder how long it will take to settle, and whether there is anything I can do to help it along? I have noticed there are devices on the market which, according to the manufacturers, can play in the instrument automatically, apparently giving the equivalent of hundreds of hours’ playing in a week or so. Is it worth my while purchasing one of these devices? Or would I be better advised to put in the playing hours myself? IAN RADFORD, MELBOURNE, AUSTRALIA

DAVID J. COHEN I see two parts to the question. (1) Will a playing-in device actually do anything for your violin?, and (2) will it address the particular characteristics of your violin?

There are a few papers addressing changes in stringed instruments over time. Carleen Hutchins observed the effects of long-term playing on a cello, three violas, and a violin¹. The cello and two of the violas were analysed, played for periods of two to six years, then analysed again under the same conditions. Another viola was played only intermittently. The violin was played little over a period of eight years, but was vibrated continuously for a period of 1,500 hours using classical music from a radio station. Some small changes in the amplitudes and frequencies of some of the air cavity modes and body modes were observed. The amplitude changes were on the order of a few decibels at most, measurable but barely audible. The frequency changes varied from zero to around 20Hz. Normal changes in relative humidity and atmospheric pressure result in changes in the 5–10Hz range. Some favorable changes in the players’ impressions of the sound quality of the instruments were noted, but no objective tests were described.

A fully double-blind experiment performed with several guitars and several listeners/players was described by Clemens, et.al.³. They found absolutely no effect from the recommended treatment using one of the commercially available break-in devices.

So, will treatment with a break-in device improve your violin? My opinion based on available evidence is that there is not a definitive answer to that for bowed stringed instruments. My opinion based on my scientific intuition, however, is more sceptical.

ROBERT GRAVLIN The sonic qualities of a violin are largely inherent in the way it is made: the arching, graduations, and set-up. Of these, set-up is the most easily and practically changed.  Several members of the Southern California Association of Violin Makers have tried using playing-in devices in the past, and none of us has found them to be effective; actual vigorous playing is best for that, for reasons not yet understood. However much the sound may open up, the basic frequency balance remains.

It is likely that a violin that sounds too bright has construction and design features that emphasise higher frequencies and noise. Some things can affect this are: neck angle, which determines string angle over the bridge (ideally 158 degrees), and bridge cut. If the neck angle is steeper than optimal, the sound will be louder but brighter and harsher, owing to too much pressure on the bridge. As for the bridge, the thickness at the top should be around 1.3–1.4mm. Thinner than that will emphasise high frequencies and they will be noisy.

Another common method of cutting bridges makes them wedge-shaped, with the front face flat and tapered; this leaves it too thin above the knees, which can increase volume but brightness as well. One violin made in the workshop had a similar problem of being too bright; the solution was to cut thicker bridges until the brightness and noise were tamed, and the final bridge was nearly the full thickness of the blank at the top, somewhere around 1.8–2mm (not that you would need this extreme). It’s also beneficial for the bridge feet of a new violin to be about 4.5mm thick. A thicker bridge acts like a mute.

You can also try strings that are not as bright. Dominants, Evah Pirazzis, and others tend to be bright and are frequently standard on a new instrument. Corelli Cantiga, D’Addario Zyex and Amo are some that tend more to warm. Strings are only about five per cent of the sound, though.

R.M. MOTTOLA An Internet search for information on break-in devices for stringed instruments will indicate that much controversy surrounds their use. I am aware of one thorough scientific research effort on the efficacy of these devices. It was conducted at Stanford University and tested one such device on steel string guitars. Although it involved a small population of instruments (six) and a small population of human assessors (nine), the study was well designed and implemented. The research randomly assigned each instrument to a treatment group or a control group. Those in the treatment group were subjected to vibration treatment, while those in the control group were not, and were used for statistical comparison. The study showed no statistically significant changes in the ratings of the human assessors post vibration treatment.

The study was double blind. Neither players nor the researchers administering the player-evaluation part of the study knew which instrument had been treated and which had not. The study also examined the frequency response of the instruments both pre- and post-treatment, and found no significant change in the correlation between treated and untreated instruments. In addition, the study collected acceleration data from the instrument tops during vibration treatment, and found that the magnitude of acceleration during treatment was about 100 times less than what would be produced by a gentle strum.

Publication of this exemplary study seemed to have raised interest in the subject for a while, but two years later there are still no contradictory studies published in any peer-reviewed scientific research journal. Research in musical instrument acoustics tends to focus on small experiments; the funding is generally not available to conduct larger ones. The lack of journal-published research by manufacturers of these devices is curious, as positive results of such research would be economically advantageous to those companies. Scientific research never provides absolute proof and there is clearly a paucity of appropriately published research on this subject, but what research is currently available suggests that vibrating break-in devices of the class assessed in the 2014 study are probably ineffectual.

David J. Cohen was a chemistry professor until his retirement in 2003. Since then he has been a luthier of mandolin-family instruments and guitars: cohenmando1@verizon.net

Robert Gravlin is a violin maker based in Bonsall, CA, US, and historian for the SCAVM: www.scavm.com