Violinist Philippe Quint on the music of Charlie Chaplin

A trailer for Philippe Quint’s new album of arrangements of music by Charlie Chaplin. In the sleeve notes, Quint writes:

Growing up in the former Soviet Union in early 1980s during its Communist era, meant that there was little access to art and artists from the West. We were occasionally enjoying audios and videos that were smuggled into the iron wall country somehow.

However, Chaplin was an exception. His movies were shown to us all the time. I even remember once dressing up as Charlie for one of the gatherings in my high school in Leningrad.

Perhaps because the majority of his movies were silent, the Soviets felt that for sure there would not be any political agenda or secret, poisonous Western messages conveyed through the screen.

Since my arrival to the US in 1991, I finally was able to acquire Charlie’s films on VHS. I remember I found them in a second-hand store and thought that I just found a treasure chest. City Lights, Limelight, and A King in New York were the first three I owned. I watched them hundreds of times, every time noticing something new, something I hadn’t seen before. His comedy was brilliant and touching. But to me he was also one of the greatest dramatic actors.

A few years ago, while looking for a new CD project I stumbled upon “Smile.” Of course, I had heard this song a million times in all different versions but somehow the fact that Chaplin composed it never crossed my mind. I became curious to see if there was more music written by him. After doing a web search, to my great surprise, I uncovered one song after another and eventually came across a whole song book. Through the discovery of these songs, I really fell in love with his music, for its disarming simplicity that spoke directly to my heart. Almost Mozartian in its grace and charm, Chaplin’s music is deceptively simple. In other words, it may sound “simple,” but it reaches the deepest part of our souls. 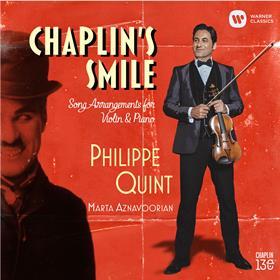 I went through a few dozen songs and soundtracks all written by Chaplin and selected thirteen that I thought would be a perfect match for violin and piano. Joining me on two of the tracks is my dear friend and colleague, the brilliant violinist Joshua Bell.

My enormous gratitude goes to Joyce Saxon and Jim Stone for their incredible generosity, and without whom this project would not be possible. I also would like to thank legendary radio executive, Steve Robinson, for his tremendous support and belief in this project from day one. I hope you will enjoy these terrific and unique selections.