This season marks two years since Frank Huang became concertmaster of the New York Philharmonic. But, as Ken Smith discovers, the Chinese-born musician might have quit the violin as a teenager had it not been for the influence of Donald Weilerstein, who taught him to think beyond the technical proficiency encouraged by his ‘tiger mom’ 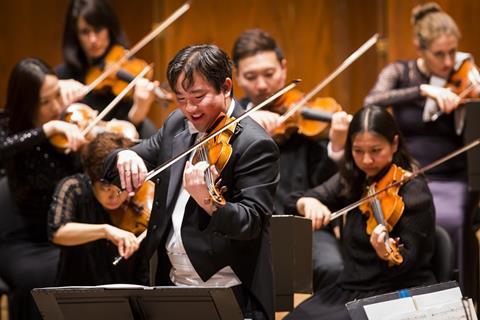 The following is an extract from a longer article in The Strad’s November 2017 issue – to read it in full, download the issue on desktop computer or via the The Strad App, or buy the print edition

A turning point came at age 16, when he left home for the pre-college programme at the Cleveland Institute of Music. Away from his parents, he developed a social life and encountered a very different teaching style in Donald Weilerstein, who would become his biggest influence. The relationship, though, took time to blossom. ‘In those early lessons, I didn’t understand a thing he said,’ Huang admits. ‘He’d say things like, “Sing this through your third eye,” or, “Feel this from your lower vertebrae,” and I thought, “This guy’s crazy.” The only thing I learnt in my initial year was how to smile and pretend I understood.’

Huang stuck it out, though, mostly for the social freedom of campus life. His first heartbreak, he recalls, came as he was learning the Tchaikovsky Concerto; for the first time, he made a direct connection between music and emotional intensity. The experience marked the beginning of his love affair with music.

‘At the end of that first year, Don [Weilerstein] pulled me aside and said, “I think you’ve improved a lot,”’ Huang recalls. ‘“You don’t sound like someone is making you practise. I get a sense that now you’re playing for you.”’

During those Cleveland [Institute of Music] years Huang began committing himself to music seriously. ‘Don was great at making me think about colour and character in ways that went well beyond technical proficiency,’ he explains. ‘He’d rarely approach anything from a technical view. He’d say, “Decide what you want to say, and we’ll figure out how to get there.” So I stopped focusing on playing faster, cleaner, louder. I shifted from “how do I convince people that this player is amazing” to “how do I convince people this piece is amazing”. And really, it takes a lot of pressure off you as a performer.’