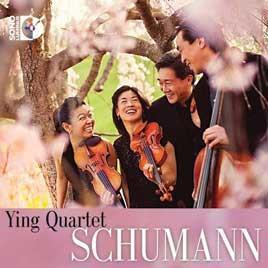 The starting point of this homage to American chamber music is Barber’s op.11 String Quartet, the second movement of which, in its arrangement for string orchestra, became ‘the’ Barber Adagio. Resident at the Eastman School of Music, the Ying Quartet includes the premiere recording of Barber’s discarded finale (one critic called it ‘a scrappy working-out of unexciting ideas’) which was later replaced by a much shorter end piece based on the first movement. The Ying presents this dance-like original finale with fleet-footed panache, and the disc continues to the end with the same uninhibited yet polished playing. Barber’s even earlier op.1 Serenade benefits from the Ying players’ balanced ensemble and fluidity of expression. Dover Beach, absorbingly sung by Randall Scarlata, is searching and evocative and if Howard Hanson’s Concerto da camera for piano quintet may amount to little more than an interesting novelty, his String Quartet comes over as a neglected masterpiece.

As if to emphasise the Ying Quartet’s poise, the players end with a string arrangement of Randall Thompson’s choral Alleluia, producing a sheen of vocal purity and a mesh of gorgeously interweaving counterpoint. It’s a shame the piano sound is slightly muffled in Hanson’s Concerto da camera, because the quartet is otherwise captured with both intimacy and a modest (in the best sense) bloom. This is a highly recommended release, and not only to self-confessed fans of American music.