An adjustable, carbon-fibre alternative designed to offer enhanced control to the luthier and superior sound to the player 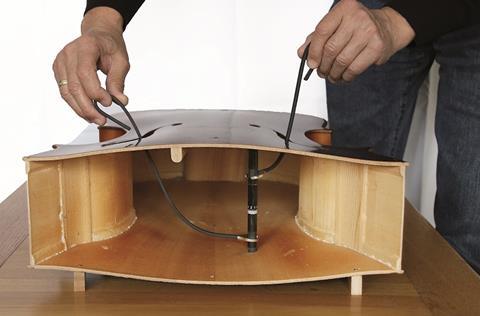 Few elements of stringed instrument construction are more mysterious than the soundpost – its Italian name, anima, is the same as the word for ‘soul’, reflecting the crucial but enigmatic part it plays in creating an instrument’s sound. ‘Ours is the world’s only height-adjustable carbon fibre soundpost,’ says Pal Molnar of Anima Nova.

‘By turning a thread cut into the material, the height of the soundpost can be adjusted while inside the instrument to create the optimal tension between the front and back plates. Ball-and-socket joints allow the contact points at each end to match the angle of the wood perfectly.’ According to Anima Nova, players with the soundposts fitted inside their instruments report quicker response times, richer overtones, and even reduced wolf notes.

Molnar explains that the idea of a height-adjustable soundpost is over 200 years old, but that the details of these early inventions have been lost. ‘No thread cut into wood could withstand the tension put on it by the plates of a cello or double bass, for example, while metal threads don’t create enough friction and can slip when exposed to sound waves. The surface of machined carbon fibre, however, resists spontaneous movement.’

It was a huge technological challenge to cut a thread into such a strong material, says Molnar, and was one of the reasons the Anima Nova soundpost took more than five years to develop. ‘Initially, it should be fitted without tension, which can feel strange for luthiers who have spent decades installing traditional wooden soundposts.’ After the correct position has been found, the tension can be increased gradually.

‘Even though the printed scale shows increments of 0.02mm, some players tell us their preferred soundpost height comes between two of those lines, showing just how vital it is to find exactly the right tension.’