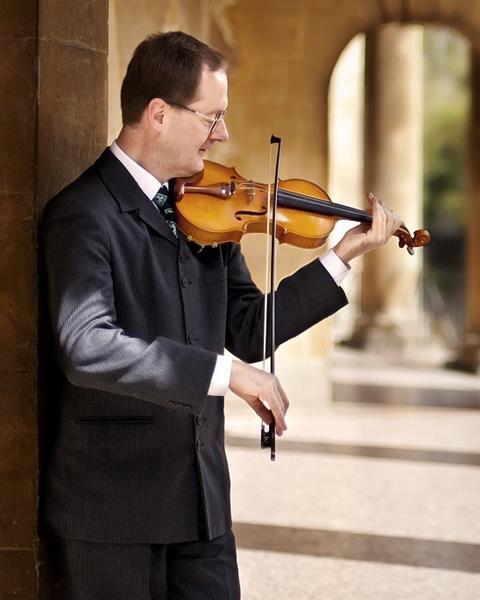 Last year, I recorded an album of solo violin music from the Baroque period, including the Six Partitas by Johann Joseph Vilsmaÿr of Salzburg (1663 - 1722), which were a joy to discover. As a modern player who had never experimented with a Baroque setup before, I had the challenge of exploring and understanding the music and taking the decision of how to record it – either with an authentic, period instrument and bow, or with my existing violin, with which I am entirely happy (a beautiful modern instrument made by Irish luthier Martin McClean).

Solo Baroque music required a different approach from anything I had recorded before – and like many modern players, my musical understanding has been deeply affected by the revolutions in period performance that have taken place over the last half century. It’s fair to say that our perception of Baroque music has changed greatly as a result of this and the parameters of what we consider tasteful in the interpretation of music have been altered considerably. But there are also questions to challenge us: how far do we go in the pursuit of rigorous ‘authenticity’? What is the right balance between stylistic accuracy (and the correct equipment to achieve this) and the heart and soul of the music? Do the instruments themselves create an unnecessary obsession and barrier? Do they have unforeseen consequences in phrasing and choice of tempi? Would we really want to sound like a 300-hundred year old orchestra anyway? And if so, how strange would this sound to modern ears? Then again, would we really want to return to the interpretations of ‘old school orchestras’ from say the 1950s, whom to our ears play the music in a romantic, soul-wrenching way? And, as our notion of ‘authenticity’ continually evolves, will recordings of the present day sound as dated 50 years hence as period-instrument recordings from the mid 1960s sound to us now?

I realised that Vilsmaÿr’s Six Partitas wouldn’t benefit from a purely ‘modern’ approach, which would be at odds with these simple, unaffected dance movements from 1715. Then again, my own violin made in 2007 is a beautifully pliant instrument, capable of a rich palette of different sounds and I wanted a setup that would allow these qualities to shine.

Firstly, I strung my violin with pure gut strings that were designed to be at full tension for A = 415Hz (so approximately a semitone lower than our modern concert pitch). I was then fortunate enough to be lent a lovely replica snakewood bow. I also experimented with playing without a chinrest (an innovation of the early 19th century) and shoulder rest (a 20th century invention) and I thought it would be interesting to share my experiences with other players.

Firstly, the gut strings. I persevered with them for almost a month and thoroughly adjusted to them - but to my ears, I never found them tonally satisfying. I am happy to concede that the fault may be in my own musical conditioning, but the sound they produced seemed somehow to lack variety.  I have huge respect for musicians who spend their whole lives playing on gut strings; I also concede that a month is hardly enough time to effectively master a completely new way of playing. But for me, it was enough time to decide that they weren’t going to offer me enough tonal variety to make the 120 minutes of solo violin music on the discs a compelling listen. In the end, I decided on using Pirastro Oliv gut-core strings at the modern pitch of A = 440.

Secondly came the chinrest/shoulder-rest experiment!  I have the utmost admiration for the skill and dexterity of Baroque violinists who play without a chinrest and shoulder rest (naturally, as these are ‘anachronistic’ developments of a later age), but I found that the resulting restriction in my playing was a distraction, rather like riding a horse without a saddle: an immense skill but does it necessarily improve one’s horsemanship?

But when it came to experimenting with different bows, I found this to be an absolute revelation. A Baroque bow encourages naturally elegant phrasing and imperceptible changes of bow, and this has a transformative quality on the ability to spin a musical line. Although it is true that the setup I used was essentially a modern one with a replica-Baroque bow, nonetheless, the difference in sonority and character when compared to a modern setup seemed considerable. It is more polite, graceful and understated than its modern descendant. I can understand why many people would criticise a ‘hybrid’ or ‘halfway’ setup as being a little bit pointless, but this player arrived at it after much consideration. The feeling was of striving to achieve a ‘best of both worlds’ rather than lazily opting for an ‘easy way out’. My approach was to use the minimum of vibrato, hopefully allowing the expressive lines of the music to ‘sing’ through the instrument and phrasing very much through the bow.

Whether played on a ‘modern’ stringed instrument or a ‘period’ one, I often feel that the 21st-century mindset intrudes. When a composer writes a Gigue in 6/8 or 12/8, the six or twelve quaver beats in each bar are often replaced by the feel of two or four larger beats. How many times have we heard both modern and Baroque players performing a Gigue so quickly that no-one could possibly dance or even tap their foot to it, robbing the music of its meaning  and blurring every feature? The strongest impulse is the rhythmic pulse of the music; the drama inherent in the intervals of both melody and harmony; singing through the instrument. When these elements are present, for me the music takes on a vivid imagery and space opens up between the notes.

I had also chosen to record the album at St Mary’s Church in Willen, Buckinghamshire. This building was contemporaneous with the Vilsmaÿr pieces, designed by Robert Hooke and built in 1680. Its light, airy, Baroque design felt entirely congruent with the music I was playing.

Once I had found this imagery, the questions of gut strings, flatter bridge or type of bow felt less important because I was more concerned with bringing out the qualities inherent in the music itself. As György SebŠ‘k said in Susan Tome’s book Sleeping In Temples, ‘play the contents, not the container’. The rhythmic pulse in the dance suite and vocal ‘singing’ qualities of the melody are most definitely the contents, whereas the set up of the instrument is – to me – the container. I felt that my playing was very much in a Baroque style, albeit on an instrument made in 2007, and I have also heard some violinists playing such music in a romantic way after painstakingly insisting on using every minutiae of 18th-century technology.

It seems that the early 18th-century occupants of Europe were wonderfully unconcerned with standardisation. Tuning altered from one province to the next (indeed from one church organ to the next) and stylistic practices were also diverse – they may well have been amazed at our fixed adherence to set principles of performance.

In conclusion, my choice was to take a leaf out of their book and try to shake off my modern day obsession with ‘right’ and ‘wrong’, in order to draw my inspiration from the music itself.

Listen to Vaughan Jones performing works from the album below: