Jordan Cartwright, who conducted the Edmonton Symphony, was introduced to classical music by a therapist while undergoing chemotherapy 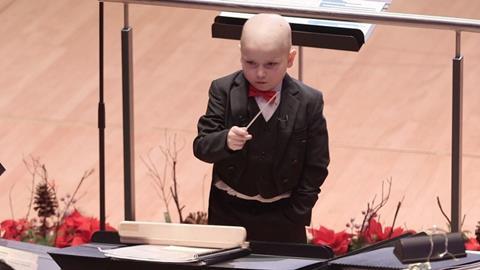 Jordan Cartwright from Alberta, Canada, has been given the opportunity to live out his dream of conducting a symphony orchestra.

The seven-year-old, who has been battling leukemia since March 2016, was introduced to classical music by a therapist while undergoing chemotherapy, according to CTV News.

The youngster conducted the Edmonton Symphony Orchestra in the Canadian national anthem at a Christmas concert during December with the help of the Ronald McDonald House charity.

'That was such an overwhelming, proud moment for me and my wife and I think everybody in that auditorium,' said Jordan's father Scott Cartwright.

Watch Jordan conducting the orchestra below: